Christian TV Host: Trump is God’s “Instrument” and His Critics Can “Get Out” June 20, 2018 Hemant Mehta

Christian TV Host: Trump is God’s “Instrument” and His Critics Can “Get Out”

Last week, Leigh Valentine, the host of Faith & Freedom on Bill Mitchell‘s “YourVoice America” network, said that Donald Trump‘s every word had the “hand of God upon it.”

I guess that wasn’t enough buttering up, because Valentine did it again over the weekend. This time, she explained that God sent Trump to save our nation and his critics could “just get out” if they didn’t like it.

“I really believe that whether [Trump] is fully aware of it or not,” Maltby declared, “the country is on the cusp of experiencing a tremendous spiritual renewal. And I believe that he is an instrument in the Almighty God’s hands to turn some pages and some new narrative to be written.”

“God has built him for this moment,” McDonald agreed. “That’s why I don’t think that anything he says is beyond the pale … At the end of the day, I’m right there saying, ‘Go for it, man. Keep preaching. Keep preaching, President Trump, I’m with you.’”

After urging liberals to “open your ears and open your eyes” to see how God is using Trump, Valentine later declared that “if you don’t like this country and you don’t like the president, well, there’s a lot of other countries that you can go to. Just get out. This is the time to get out because the Trump train is rolling.”

It’s ironic that she chose this weekend to make those claims, just as the public began to learn more details about Trump’s concentration camps housing immigrants who had just had their kids stripped away from them.

She wants to live in a world where families can be ruthlessly separated and it’s those of us who defend the rights and dignity of strangers who need to “get out.”

And of course, she used the Christian God to justify his cruelty. What else is new?

June 20, 2018
An Appeals Court Will Decide If Tax-Free Housing for Religious Leaders is Legal
Next Post 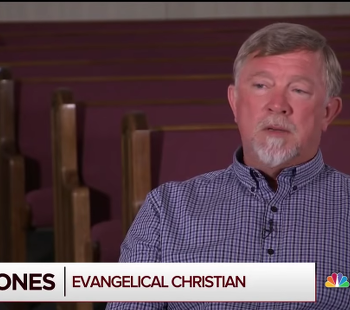 June 20, 2018 Evangelical Pastor Falsely Claims Donald Trump's Child Camps Are "All a Big Lie"
Browse Our Archives
What Are Your Thoughts?leave a comment