A Canadian mayor used a loophole to promote Christianity during a city council meeting, opening the door to discussions about whether other government officials will follow suit or if any action will be taken to shut this method down.

It all stems back to the 2015 Canadian Supreme Court ruling prohibiting Catholic prayers at the Saguenay city council meetings. It was a broad ruling, too, meaning it applied to other cities. Unlike the U.S., formal prayers could not be part of government meetings.

Louiseville (Quebec) Mayor Yvon Deshaies got around that issue last week when he asked citizens to stand for a reading of the National Anthem… before hanging a crucifix on the wall. 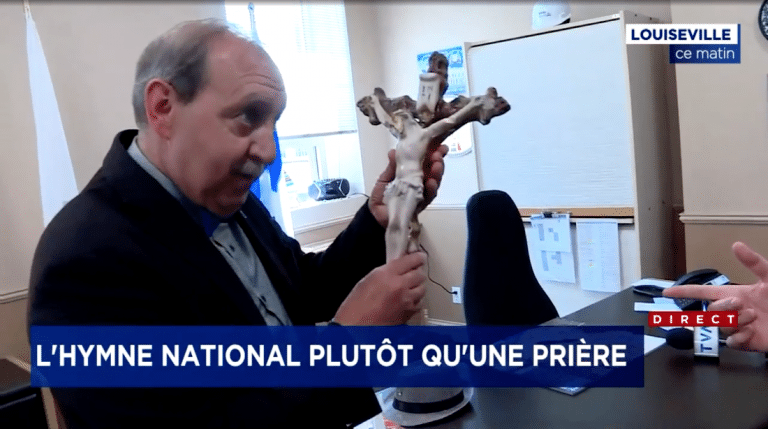 The Canadian anthem is mostly secular, with the only nod to God being the line, “God keep our land glorious and free!” However, Deshaies read a translation of the French version of the anthem — including the additional stanzas no one ever talks about.

Those verses are full of Christian imagery:

That’s just a prayer by another name.

Deshaies kept going with the religious proselytizing that night and, later, he wasn’t even subtle in explaining why he did it:

Deshaies then hung a crucifix on the wall of the community centre where the meeting was held, drawing applause from most of the roughly 70 people in attendance

In an interview Wednesday, he said his actions were in response to news about religious minorities seeking to work as police officers in Quebec while wearing such symbols as the hijab and turban. “Where are we headed?” he asked.

He’s Christian and he’s a bigot. (I guess Donald Trump is rubbing off on them…)

Deshaies also said non-Christians could always “arrive 10 minutes later” to meetings if they didn’t like what he was doing — something you know Christians would denounce if people said it about them — and added that the crucifix would remain in place because “That is our culture, whether you are for or against.”

Because his city is very conservative, there’s no imminent lawsuit over his actions. Someone would have to fight back, and no one’s stepping up to do it. Deshaies isn’t worried, though, because he thinks he’s on solid legal standing. After all, if they ruled against him, wouldn’t they be ruling against the National Anthem?

This is exactly why Christians in the U.S. try so hard to push for “In God We Trust” signs at city halls while freaking out at the thought of eliminating the Pledge of Allegiance (with “under God”) from public schools. They claim those things have nothing to do with religion. The courts have almost always agreed with them. But common sense tells you that argument just isn’t true. Those words are all about religion — specifically Christianity. Those who think otherwise are lying to themselves.

When enough time passes, though, it becomes harder and harder to fight for religious neutrality. Those phrases just become “ceremonial.”

Deshaies knows that, which is why his Christian prayer at a city council meeting came in the form of a government-sanctioned song. 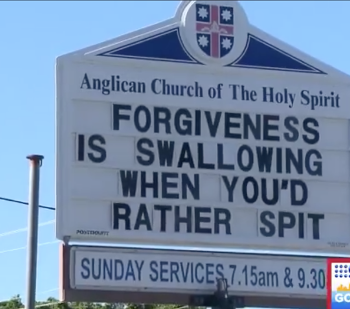