Christian Right activist Dave Daubenmire, last seen telling men not to touch themselves because it’s totally gay, said on his “Pass the Salt Live” webcast today that he’s organizing protests in Ohio outside a mosque, abortion clinic, and Pride parade.

Why? To “shame” everyone into loving Jesus. 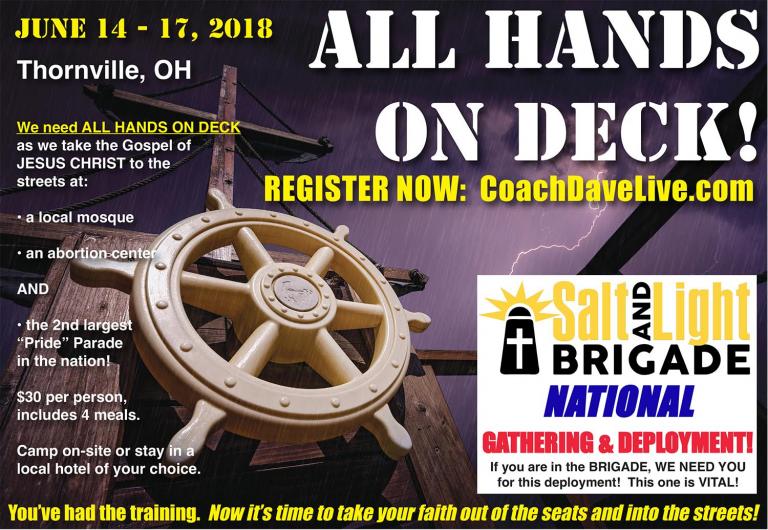 And just in case you’re unfamiliar with how “gay” works, Daubenmire filled everybody in on the details:

“I think shame is a good thing,” he said. “Same breaks you down. Shame drives you to your knees. Shame lets you know that you need a savior.”

“What do you mean, ‘Why do you make them feel ashamed?’” he added. “They’re going to go kill their baby! Don’t make them ashamed? What!”

I have no clue how he plans to shame people who understand — and are celebrating — that they have nothing to be ashamed about. Also, Daubenmire spends way more time thinking about how gay men have sex than all the gay men who will be at the Pride parade.

It’s telling that Daubenmire feels the need to force his views down everyone’s throats. It suggests that the story of Jesus and what He offers isn’t good enough for some people. And if Muslims went to a church to “protest” the same kind of thing, wouldn’t Daubenmire be the first guy to call it persecution?

Anyway, this is the sort of event that’s bound to backfire. Trying to make people feel bad about themselves when they’re celebrating their identities, making a choice that’s difficult for many of them, or just trying to peacefully practice their own religion will never work.

It’s the same reason Westboro Baptist Church doesn’t inspire a lot of converts and inadvertently pushes more people away from their religion.

So I guess we should all send Daubenmire a thank-you card. He’s doing our work for us.

June 11, 2018
Queer Disbelief, Our Book About LGBTQ Rights and Atheism, Is on Sale!
Next Post 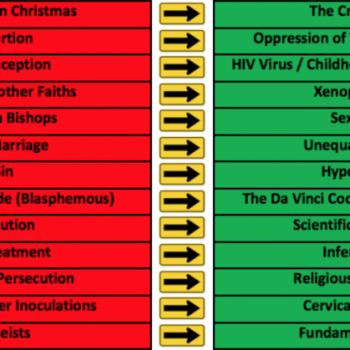 June 11, 2018 Conservative Christians Are Mad About the Wrong Things; This Chart Corrects Them
"Hate blinds you more than mas-tür-bating, if only they would get that."
CorporalKlinger Rick Wiles: A “Satanic Zionist Power” ..."
"Sorry, Jesus was White Jewish, Caucasian Jewish. Didn't you know?"
Foxglove Rick Wiles: A “Satanic Zionist Power” ..."
"I'm now hearing it's $40 million."
alverant Liberty University Just Sued Jerry Falwell, ..."
"When it's through with its errand...I'd like to have a word with it...."
starskeptic Everything Wrong With Exodus 1 in ..."
Browse Our Archives
What Are Your Thoughts?leave a comment