You may have seen a version of this meme before, perhaps via a religious relative on your Facebook feed. It’s meant to dismiss atheism by claiming it makes no sense:

It’s simplified to the point of being ridiculous — that’s the idea — but it’s also telling that whoever wrote it thinks evolution involves going from “self-replicating bits” to “dinosaurs” in one fell swoop instead of over several billion years.

Anyway, it’s the sort of statement you expect to see in a Ken Ham lecture or in a sermon from a pastor who didn’t do his homework that week and is desperately searching for material. It’s a cheap laugh for ignorant people.

You don’t expect to see it in a public school classroom.

Yet a sign with those words was seen inside a classroom at West Stanly High School in Oakboro, North Carolina. Someone, perhaps a student, sent a picture of it to WSOC-TV in Charlotte. After they contacted the district’s superintendent, the sign quickly came down.

The superintendent also told the station that “personnel action was taken,” whatever that means.

We don’t know who put the sign up, how long it was there, or why it was there. But some teacher clearly thought it was hilarious. Kudos to whoever alerted the media. (If you’re that person, get in touch with me. I want to hear more about this story!)

Imagine if an atheist teacher put up the Christian version of the same sign in a classroom? 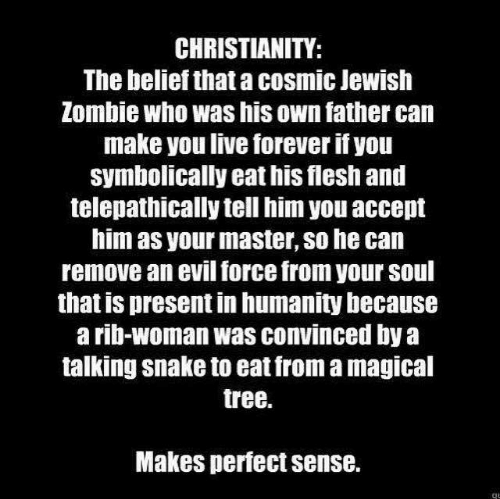 We’d never hear the end of it.