Evangelist Ray Comfort Is Rebooting “Way of the Master” (a.k.a. The Banana Show) June 1, 2018 Hemant Mehta

Evangelist Ray Comfort Is Rebooting “Way of the Master” (a.k.a. The Banana Show)

In 2003, Creationist Ray Comfort and actor Kirk Cameron began a TV show called Way of the Master. It was a mix of Christian apologetics and segments in which they asked unsuspecting strangers if they were good people (they always were) just so they could explain how those people were going to hell unless they accepted Jesus.

Without a doubt, the most famous segment from the show — the one that still lives on today — was the infamous clip from 2006 in which the two men argued that a banana was the atheist’s worst nightmare.

Comfort wrote a book last year and made a film last month revolving around the infamy of that clip. The book even includes commentary about how atheists have responded by saying a modern banana is actually very strong evidence for how evolution works.

Now, Comfort wants to bring back the entire show. He announced in a video that he’s raising money for a new season of Way of the Master.

Why Bring It Back?

“Way of the Master” has had an enormous impact around the world. We love hearing from parents who raised their kids watching the show, and from teens, college students, and others who were equipped to reach the lost through “Way of the Master.”

Most encouraging is when we hear from atheists, lukewarm churchgoers, and those in other religions who tell us how God used the show to bring them to a saving faith. The television program has been our ministry’s most far-reaching project to date!

Look: If you were led to Christ by this show, your atheism wasn’t that strong to begin with.

Comfort says building and filming a season of the show would cost $350,000, and the fundraiser is already up and running. He adds that the “true cost of the show is greater than our crowdfunding goal,” but that if the goal isn’t reached, he’s going to make the show anyway.

Kirk Cameron isn’t mentioned in any of the promotional material, and that’s because he won’t be involved in this reboot. (Maybe he’s too busy filming awful Christian movies.) Comfort confirmed to me that he’ll be sans Cameron for this project but added “we are still good friends.” (Update: Comfort added that Cameron may introduce some of the clips but he won’t be the co-host.)

So if you want to see more cringe-worthy banana videos, you should donate…? Or maybe you can spare your wallet and just pray over it. 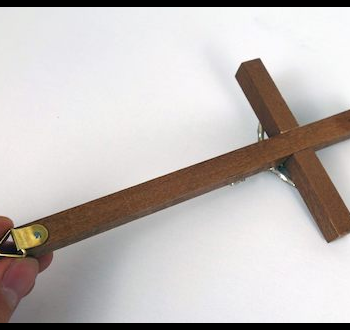 June 1, 2018 Satanists Send Bavarian Officials Upside-Down Crosses to Hang in Buildings
Browse Our Archives
What Are Your Thoughts?leave a comment