Appeals Court Rejects Atheists’ Arguments to Remove “In God We Trust” from Money May 29, 2018 Hemant Mehta

Back in 2015, Michael Newdow, the atheist who fought all the way to the Supreme Court to remove “Under God” from the Pledge of Allegiance, filed another lawsuit to remove “In God We Trust” from U.S. currency.

That attempt just hit another roadblock today as a divided appeals court ruled against him.

The federal lawsuit, which was filed in Akron, Ohio, was unique for relying not on the First Amendment’s Establishment Clause (as you might expect), but on the Religious Freedom Restoration Act (RFRA). In essence, Newdow took the same argument used by Hobby Lobby to get out of covering contraception for its employees and said that the U.S. Treasury couldn’t push God onto atheists without a “compelling governmental interest,” which he said they didn’t have.

Newdow wrote about his strategy on this site:

There is obviously no compelling government interest in having “In God We Trust” on our money. We did fine for the 75 years before the phrase was ever used at all, and continued to do fine for the subsequent 102 years before such inscriptions were made mandatory on every coin and currency bill. Similarly, the vast majority of nations manage to function without religious verbiage on their money.

Accordingly, for those who feel that being forced by the government to carry a message that violates their religious ideals is substantially burdensome, lawsuits are now being prepared in the seven (of twelve) federal circuits that have not yet heard challenges to this governmental practice. Although the arguments demonstrating that the godly inscriptions violate the Establishment Clause will again be raised, the RFRA claim will (for the first time) be the lead argument in each case. Hopefully, in at least one of those circuits, two appellate judges will be willing to acknowledge the statutory violation.

He actually put a call out for plaintiffs in that post, and many readers responded from across the country.

This particular lawsuit had 41 plaintiffs. They included many unnamed parents and their kids, several named individuals, the Michigan Atheists and Northern Ohio Freethought Society groups, and one believer (Adam Clayman). The defendants include Congress, the government, the Secretary of the Treasury, and others.

Here’s what it actually said about RFRA:

By placing “In G-d We Trust” on the nation’s coins and currency bills, Defendants have substantially burdened Plaintiffs in the exercise of their Atheistic (and similar) beliefs by requiring them — as the price to pay for using the nation’s coins and currency bills — to personally bear a religious message that is the antithesis of what they consider to be religious truth. Similar, for Plaintiff Clayman, Defendants have required him to sin.

(Clayman, by the way, was the reason the lawsuit used the word “G-d” instead of “God” in most instances. It was out of respect for his beliefs.)

Newdow also said the government overstepped its authority when putting the phrase on money:

By inscribing “In G-d We Trust” on the nation’s coins and currency bills, Defendants are making the religious claims that (i) there is a “G-d,” and (ii) the people of this nation do (and should) “trust” in that “G-d.”

He wasn’t asking for money beyond legal costs, but the crux of what he wanted was for the phrase to be removed from money:

To permanently enjoin Defendants from minting coins and/or printing currency on which is engraved “In G-d We Trust;”

I wrote in 2016 that there was a good chance casual readers would roll their eyes when reading the complaints from the atheist plaintiffs who had to explain why they were suing (in order to have standing in the case). Their reasons included:

You could laugh at all that, but the Supreme Court heard a case in 2016 involving Catholic nuns who said filling out a short form to get out of paying for contraception for their employees was a violation of their faith. The point was: If you have a firmly held religious conviction, the courts don’t get to judge how silly it is. Newdow was using that logic to make a very different kind of argument on behalf of atheists.

In late 2016, Ohio Federal District Judge Benita Y. Pearson ruled that there really wasn’t a substantial burden on atheists, in part because they didn’t even need to use paper money. So much for the RFRA argument:

Plaintiffs argue that cash transactions force them to bear a message that they violates their religious beliefs… But as the Supreme Court stated in Wooley v. Maynard…, “[t]he bearer of currency is thus not required to publicly advertise the national motto”…

Furthermore, Plaintiffs’ other concerns, that they may be subject to peer pressure or ridicule, or that their children may question their beliefs, are unlike the choice between a “basic benefit and a core belief” described in the Supreme Court’s case law.

What about the argument that using money with “God” on it forced atheists to “proselytize that religious message”? The judge said that wasn’t true at all:

Printing the motto on currency is distinguishable from forcing an individual to salute the flag or display a license plate. In Barnette [the Supreme Court case which said students could not be forced to stand up for the Pledge of Allegiance], for example, plaintiffs were forced to actively participate in speech… An outside viewer might reasonably think that the student was saluting the flag as an expression of her loyalty, even if the student was opposed to the notion. Similarly, by forcing a person to adhere “Live Free or Die” to their personal automobile, a reasonable viewer could think that a driver supported this message…

The same cannot be said for currency. No reasonable viewer would think a person handling money does so to spread its religious message. A person does not own the bills and coins printed by the United States Treasury. The government does not require citizens to display money. Money does not exist “for the express purpose that it be observed and read by the public.”

The judge also disagreed with the Equal Protection argument that “In God We Trust” on currency imposed a stigma on children of atheist parents, making them feel that “their families are somehow lesser.” She even compared the atheists’ argument to the Obergefell case which legalized gay marriage and where some people actually were treated as “lesser.”

In contrast to Obergefell, Plaintiffs in this case are treated the same under the law… Unlike the laws challenged in Obergefell, these laws affect all citizens equally, regardless of their religious beliefs. Plaintiffs’ argument that these laws support Christian and Monotheist beliefs while infringing on Atheist beliefs is better suited for an Establishment Clause argument.

How’s that for a kicker? You know this new tactic you used to try and win the case? It failed. You should go back to your original plan… which also failed.

To be sure, that ruling was entirely expected. It would’ve been shocking to see a judge agree with Newdow. But appealing the decision was always part of his game plan. All he needs is one panel of judges to rule in his favor and there will be nationwide chaos as far as this issue is concerned.

Alas, the Sixth Circuit Court of Appeals won’t be the one to do it. The three-judge panel ruled 2-1 to affirm the earlier decision.

What’s interesting to read, though, is the dissent from Judge Karen Nelson Moore. She agrees that just about all the plaintiffs have legal standing to bring forth this case, and that pursuing RFRA is a legitimate way to fight it, but she doesn’t agree that they faced a “substantial burden on the exercise of their religion.” They don’t have to use cash, she said, and when they do, it’s not really an imposition on their beliefs.

It’s hard to argue with that. Whenever I pay for something with cash and I see the phrase, I get, at most, mildly annoyed. But then the transaction is over and I move on with my life.

Moore also said the government failed to show they had a good reason for putting the religious motto on the money. More technically, she said there was no “compelling government interest” to put the religious phrase on cash, nor was the phrase “the least restrictive means of furthering that compelling interest.” She even suggested a better phrase they could have used:

… Congress could effectively promote this nation’s values with the motto “E Pluribus Unum,” which has been part of the Great Seal of the United States since a committee, including Benjamin Franklin, Thomas Jefferson, and John Adams, first proposed the seal’s design in 1782.

Damn right they could.

Remember Newdow’s ultimate strategy: He wants to fight these cases in all the Appeals Courts in the country. All he needs is one to agree with him, which is what happened with his Pledge of Allegiance case. With this decision, there are five left that have never ruled on the “In God We Trust” issue.

He’s going to keep trying in the others until he’s exhausted all options. He came close today, but it just wasn’t enough. 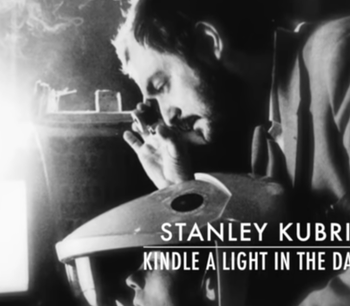 May 29, 2018
Stanley Kubrick Knew How to Find Inspiration in the Face of Mortality
Next Post