Christian Bales, the valedictorian at Holy Cross High School in Covington, Kentucky, was slated to speak at his graduation ceremony on Friday. So, following the rules, he submitted a draft of his speech on the Tuesday of that week.

Katherine Frantz, the student body president, was also supposed to speak and turned in her draft on Wednesday.

Both of them had their speeches rejected. Frantz’s was “too personal,” according to school officials, while Bales’ was too “political and inconsistent with the teaching of the Catholic Church.” The officials also said the speeches “were not submitted for review before the deadline”… which is a strange thing to say when they reviewed them in time to remove the speeches from the graduation program and tell the kids they weren’t allowed to speak during the ceremony.

But immediately afterwards, both students went outside Connor Convocation Center at Thomas More College and gave their speeches to a packed crowd of students and family members. Bales’ father even provided him with a bullhorn to make sure his message was amplified. 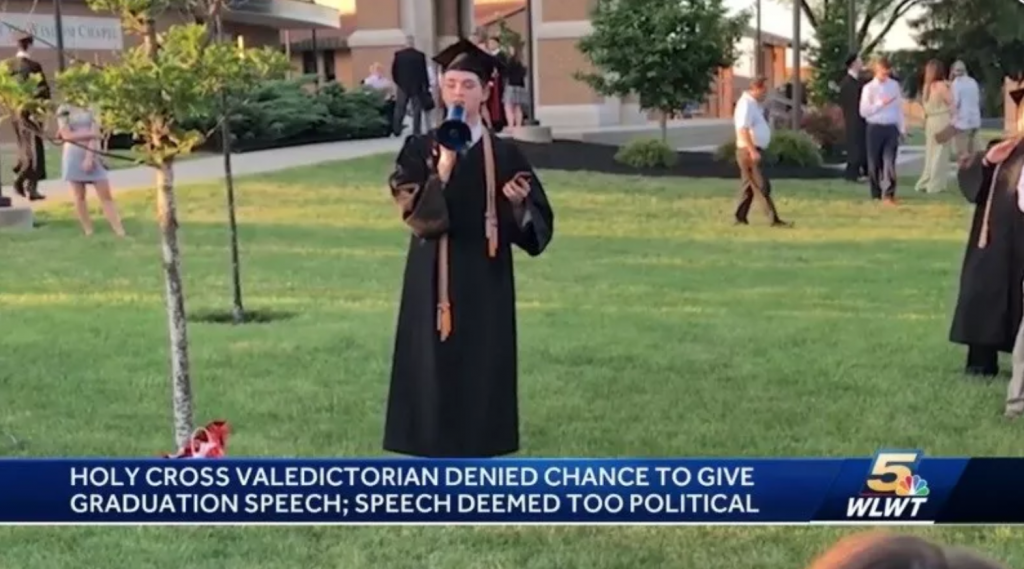 What was it about their speeches that their administrators didn’t like?

You can read Bales’ speech right here. It makes reference to the response to school shootings, his attendance at a March for Life rally, and how he and a few fellow students fought to “relocate the Jefferson Davis memorial in the Kentucky Capitol Building.” But that’s it as far as “controversy” goes. There’s far more about how wonderful his high school is, what he learned from the faculty members, and how God wants students to improve the “quality of life for those around us.”

How was that too offensive for a Catholic school? Are Catholics now in favor of school shootings and the Confederacy?

So what was really going on? Maybe it had something to do with how Bales is gay and gender-nonconforming. His mother, an ally, heard from school officials before the ceremony specifically about what her son was allowed to wear.

Bales learned that his speech was rejected on Friday morning. His mother had already been specifically spoken to about what attire was appropriate for the ceremony.

“I had a conversation with the school just basically wanting to talk about the dress code and what was expected — tie, shirt,” said Gillian Marksberry, Bales’s mother. “Christian has been known to wear his fabulous eyebrows and eye lashes and so forth. It was hard to listen because it’s always difficult when someone is not accepting your child, somebody who is honestly such a wonderful, beautiful person, but I am old enough and wise enough to know that we have to perform sometimes. That’s how we navigate through society, and he had worked so hard on this title, I didn’t want it taken from him.

“So, I acknowledged that we would respect (the dress code) and had a talk with Christian and he understood. So, we moved forward this week fully expecting to come tonight and deliver the speech and cheer him on, and that would be a wonderful closing to his high school career.”

Meanwhile, Frantz’s speech, here, is personal in all the ways you expect from a graduation address. She talks about the personal growth she and her friends went through during the four years. There’s nothing wrong with it. The only thing that might possibly be controversial — and it isn’t — is when she quotes Steve Jobs as saying, “Don’t be trapped by dogma — which is living with the results of other people’s thinking.” But, coming from her, that’s not a criticism of the Catholic Church… so what gives?

Frantz wrote in an op-ed for a local newspaper that the school made her doubt the teachings of the Catholic Church. (Talk about a situation backfiring…)

… I have been taught that the Catholic Church is loving and is for all people. To have my faith and my beliefs put into question by the diocese was extremely insulting.

Christian and I have worked for four years to earn the right to speak as valedictorian and student council president at graduation. I was shocked and upset when that honor was taken away from us on the morning of graduation. My speech is about trust in God, hope, and confidence in the future. Those are the lessons that the staff and faculty of Holy Cross gifted me with.

It is still unclear to me why the diocese rejected my speech with no opportunity for revision and showed no consideration for taking my speech away from me, my family, and my classmates.

I don’t know what the hell school officials were thinking, but if they thought they could silence two of their brightest students, they were seriously mistaken. And because the story is now spreading far and wide, maybe more families will realize why they shouldn’t send their kids to a Catholic school when there are good public schools nearby. 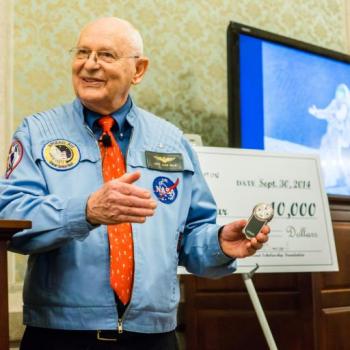 May 28, 2018
Here's Alan Bean, Who Walked on the Moon, Confronting a Conspiracy Theorist
Next Post 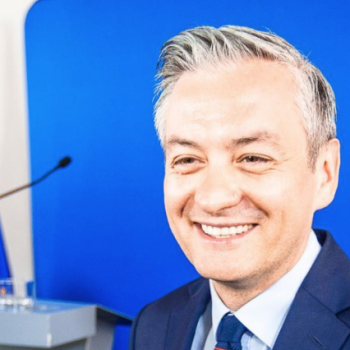