In a move that’s absolutely inappropriate if not illegal, Vice President Mike Pence told a group of pastors yesterday to “share the good news of Jesus Christ.” 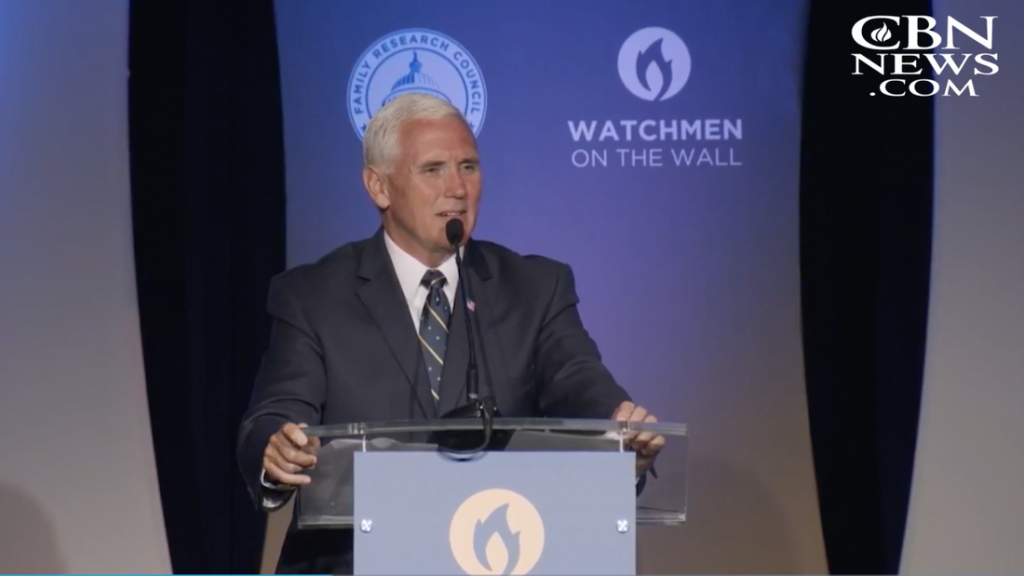 Pence made a surprise appearance at Friday’s Watchman on the Wall conference put on by the Family Research Council, which is designated an anti-LGBT hate group by the Southern Poverty Law Center.

According the Christian Broadcasting Network, Pence urged the pastors to keep evangelizing.

… Pence outlined how the Trump administration has championed causes important to the evangelical community and implored them to continue to, “share the good news of Jesus Christ.”

“Keep preaching the good news. Keep preaching in season and out of season as the Bible says. Always be prepared to give a reason for the hope that you have,” he continued.

“Forty years ago this spring, I literally walked down and gave my life to Jesus Christ and so I just want you to continue [to] share the gospel, share that life changing message,” he shared.

Pence also told the pastors what this administration had done for them — which is a rarity, considering how little they’ve done for anybody else. He referred to stacking the courts with ultra-conservative candidates, the U.S. embassy now in Jerusalem, their efforts to repeal the Johnson Amendment (so pastors can endorse candidates from the pulpit without their churches losing their tax breaks). And he even celebrated Trump’s anti-abortion stance:

He received multiple standing ovations from the evangelical crowd especially when Pence declared how President Trump is the, “most pro-life president in American history…standing without apology for the unborn and the sanctity of life. That’s President Donald Trump.”

Right. The guy who paid hush money to cover up an affair with a porn star that occurred shortly after his third wife gave birth to his fifth child is really a champion of conservative values. The guy who celebrates the “sanctity of life” has an administration that’s been tearing families apart while losing track of children afterwards. And that’s when they’re not trying to start wars all over the world. They’ve made it harder for poor people to get affordable health care, pushed for abstinence-only sex education (that we know leads to more abortions), and rallied their base against minority groups.

That’s the man who evangelical pastors continue to support, in part because Pence is right there with them.

But you knew that already.

Imagine for a moment, though, if a Democratic president went to a non-Christian religious conference and implored the audience to spread their faith. Right-wing media outlets would go nuts. It’s only because evangelicals have such privilege in this country — and in this administration — that the man who’s a heartbeat (or an impeachment) away from the presidency could show up at their event and encourage them to promote his personal faith… and it barely registers on the administration’s daily list of scandals.

So much for the myth that Christians are being persecuted. 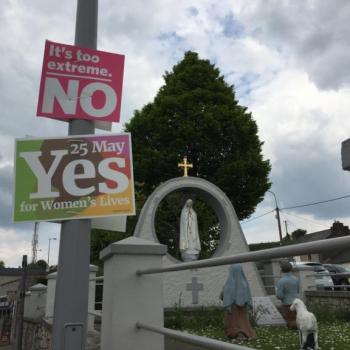 May 25, 2018
In Rebuke to Catholic Church, Exit Polls Say Ireland Has Overturned Abortion Ban
Next Post

May 26, 2018 Preacher Jesse Duplantis Wants You to Pay for His New $54 Million Private Jet
"Dissolve that church, start a new one (with someone else named as leader, but with ..."
Just Bob WA Judge Permanently Blocks Church from ..."
"He didn't make any money off the trees he planted, meaning he died without being ..."
some b@st@rd on the internet Right-Wing “Moms” Whine About Children’s Book ..."
"It is so sad. https://uploads.disquscdn.c..."
mike the panicked WA Judge Permanently Blocks Church from ..."
"Thank you for proof of a threat against my life, I will be forwarding this ..."
Tawreos “Pastor” Who Defrauded People Out of ..."
Browse Our Archives
What Are Your Thoughts?leave a comment