Angry Young Preacher: The Four Gospels “All Match Up” Perfectly (They Don’t) May 10, 2018 Hemant Mehta

Angry Young Preacher: The Four Gospels “All Match Up” Perfectly (They Don’t)

I have a problem. I can’t get enough of Matt Powell, the angry young Christian preacher who thinks all atheists are Coke-drinking, video game-playing idiots, and that scientists are hiding the truth about the Sun and moon.

His latest clip attempts to prove the Gospels are reliable. As usual, he does an awful job of it, inadvertently confirming the scientific outlook along the way.

Powell makes two major claims in this clip. The first is that whenever multiple people (who are strangers to each other) tell the same story, it must be true! The other is that the Gospels are all perfectly in sync with each other.

[Imitating skeptics] “But I can’t believe you believe the Bible!”

Number one: They couldn’t have made it up as a joke.

Number two: The Bible says that out of the mouth of two or three witnesses, let every word be established.

The great irony here is that science involves different people running their own experiments and reaching the same conclusions. But when scientists essentially confirm evolution or climate change, Powell denies them and treats their theories like fairy tales. Yet he wants everyone else to accept the miracles of Jesus using the same (less reliable) methods.

And the Gospels absolutely do not “all match up.” There are so many contradictions contained in them, it’s hard to believe they’re even supposed to be telling the same story.

Powell is so dead set on preaching irrational sound bites that he’s unable to wrestle with genuine criticisms of everything he’s saying. He’s bad at his job. And it’s preaching like this — so easy to debunk — that will lead a lot of young people out of the church before long. Because when your pastor can even make it through a minute of a sermon without telling monster lies, why should you believe him about anything else?

Not that he cares. He thinks he’s doing such a great job of preaching that the title of this video is “22 Year Old Proves the Authority of God’s Word.”

We must have very different ideas of what proof is. 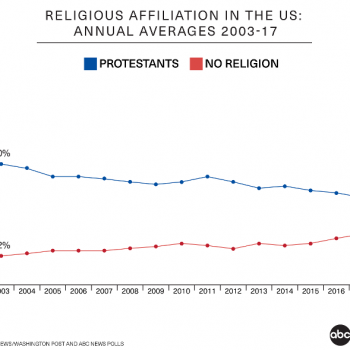 May 10, 2018
Poll Shows Americans Are Shedding Christianity in Favor of "No Religion"
Next Post 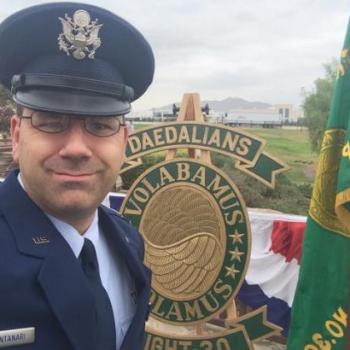 May 10, 2018 Air Force Rejects Application of Chaplain Who Converted to Orthodox Judaism
Browse Our Archives
What Are Your Thoughts?leave a comment