The pressure on Southern Baptist leader Paige Patterson to resign from his role heading up the Southwestern Baptist Theological Seminary is getting stronger, and this time, it’s coming from women who refuse to be submissive the way he demands.

Patterson, the former president of the Southern Baptist Convention, has been in the news for all the wrong reasons recently. It was a week ago that audio from 2000 resurfaced in which he gave awful advice to women married to abusive men, telling them to remain in the relationship (since divorce was never an option) and pray over it even if they were beaten even harder along the way.

Then video resurfaced of a sermon he gave in 2014 in which he told a “joke” about a “very attractive young co-ed” who “wasn’t more than about 16, but mmmmmm. Let me just say, she was nice.”

Part of the reason this is all a big deal is because Patterson hasn’t apologized for any of this and he’s still speaking this June at the Southern Baptist Convention’s annual meeting. (Just a few days ago, after one of his seminary students tweeted a link to an article critical of Patterson, the student was fired from his campus job and had his tuition break revoked. Patterson’s a thin-skinned monster.)

But now he’s getting pressure from an unlikely group of people. It’s not progressive Christians urging him to recognize the errors of his ways. It’s Southern Baptist women who are disgusting by what they’re learning about him and want him to resign from Southwestern Baptist Theological Seminary.

The open letter to the school’s board of trustees, with 841 signatures as of this writing, holds little back:

We are shocked by the video that has surfaced showing Dr. Paige Patterson objectify a teenage girl and then suggest this as behavior that is biblical. We are further grieved by the dangerous and unwise counsel given by Dr. Patterson to women in abusive situations. His recent remarks of clarification do not repudiate his unwise counsel in the past; nor has he offered explanation or repentance for inappropriate comments regarding a teenage girl, the unbiblical teaching he offered on the biblical meaning of womanhood in that objectification, and the inappropriate nature of his own observations of her body.

This pattern of discourse is unbefitting the sober, wise, and sound character required of an elder, pastor, and leader. It fails in the call to protect the helpless, the call of Christ to love our neighbor as ourselves, and the biblical standard of sexual purity. These comments are damaging, sinful, and necessitate a decisive response. It seems inevitable, for instance, that a youth pastor in any of our churches would be removed from his position if he made the comments that Dr. Patterson made at the Awaken Conference in 2014.

We cannot defend or support Dr. Patterson’s past remarks. No one should. The fact that he has not fully repudiated his earlier counsel or apologized for his inappropriate words indicates that he continues to maintain positions that are at odds with Southern Baptists and, more importantly, the Bible’s elevated view of womanhood. The Southern Baptist Convention cannot allow the biblical view of leadership to be misused in such a way that a leader with an unbiblical view of authority, womanhood, and sexuality be allowed to continue in leadership.

This is a somber time. This is an important time. We are praying for you to have wisdom, discernment, and courage.

The women putting their names on this letter are incredibly brave and deserve a lot of credit for speaking out publicly against Patterson’s behavior. I wish they would go ahead and denounce complementarianism while they’re at it; that’s the nasty Christian belief that men and women have different roles, including that women shouldn’t have any governing or teaching role in the church, the man is the head of the household, women must be submissive, etc.

Patterson may be the man of the hour, but the bigger problem here is the way Southern Baptists view women. Only when that changes will people like Patterson stop rising to the top. (There’s already a petition in Patterson’s defense.)

The good news for now is that all the backlash may be having an effect.

Christianity Today notes that the Seminary’s leaders will gather later this month to discuss these issues:

Tonight, the chairman of SWBTS’s board of trustees announced that “in light of recent events,” the full board will hold a special official meeting — at Patterson’s request — on May 22.

Is that when he’ll announce his resignation? I don’t know, but it’s more than two weeks away. That’s a long time for Patterson’s horrible statements to fester, and who knows what other previous statements of his will surface before then? If he wanted to do the seminary a favor, he’d resign right now and issue a real apology for all the damage he’s caused.

But a man who gives a sermon bragging about the hotness of a not-quite-16-year-old isn’t someone with good judgment.

And a man who’s allowed to keep his position as a seminary leader despite that isn’t surrounded by people with good judgment, either.

As I’ve said before, this isn’t just one bad apple. The entire orchard needs fumigation. At least these women are trying to make that happen. 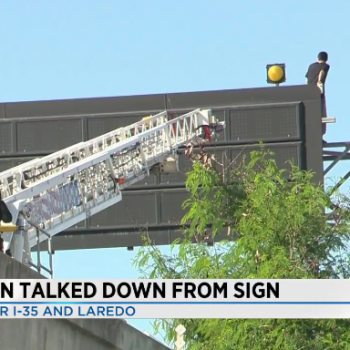 May 7, 2018 Mental Health Expert Talks Man Off Ledge; Praying Woman Gets Credit in the Press
Browse Our Archives
What Are Your Thoughts?leave a comment