On Saturday, an unidentified suicidal man armed with several knives climbed atop a highway traffic sign near San Antonio, Texas. Various passers-by, seemingly unfamiliar with the concept of compassion and decency, heckled him, laughed, and took pictures.

One woman’s response was a lot kinder (if arguably no more helpful): motorist Grace Hernandez pulled over, picked up one of several Bibles she keeps in her car, and began to pray for the man and for the first responders trying to talk him off the ledge. She explained,

“I witnessed another (suicide) on Donella on Easter and I was coming from church and I called my pastor. I said ‘I can’t believe it,’ and he said, ‘That’s why. That’s our mission — is to pray.’“ 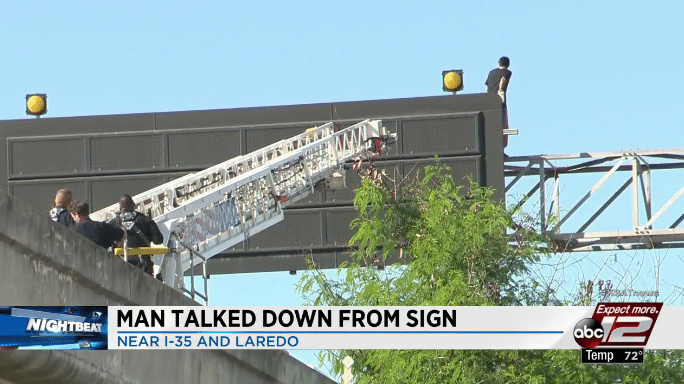 While the tense situation was still underway, Hernandez began to receive praise on social media for her act of faith. Naturally, those people, and Hernandez herself, believed that God had answered her prayers when the suicidal man finally agreed to climb down after almost five hours.

The San Antonio ABC station, KSAT-TV, aired a creditable wrap-up of the event, including an interview with a first responder and an on-screen mention of a suicide prevention hotline.

But the written coverage on KSAT’s website was exclusively about Hernandez and the power of prayer. “Digital journalist” Mariah Medina never mentioned the police officers, the paramedics, or the man’s young daughter who was brought to the scene in an effort to lift his spirits. No reference to suicide prevention made it into her web report — nor did she bother to write one word about the mental health professional who spent hours talking to the man and persuaded him to come down.

The article’s credit had to go God and to Hernandez, Medina decided.

No word on the roughly 3,500 Texans who die of suicide annually, and what it says about God that He doesn’t do anything to prevent their deaths.

P.S., May 13: KSAT’s article about the praying woman turns out to have been a secondary piece, “a break out profile piece since many asked to know more about her,” Medina explained. It was intended to supplement a hard-news article about the would-be jumper. She added,

I will talk with my editors about adding a more prominent link to the news article since some people are missing it.