Evangelist Franklin Graham, who questioned President Obama‘s Christianity and said his agenda was “against Christ and against His teachings,” takes a completely different approach when it comes to Donald Trump.

Graham said in an interview with the Associated Press that the whole Stormy Daniels scandal was “nobody’s business.” Sure, Trump’s lawyer may have paid hush money to the adult film actress to cover up how he was cheating on his third wife shortly after the birth of his fifth child… but relax, everyone. God put him in office for reasons.

… I don’t have concern, in a sense, because these things happened many years ago — and there’s such bigger problems in front of us as a nation that we need to be dealing with than other things in his life a long time ago. I think some of these things — that’s for him and his wife to deal with. I think when the country went after President Clinton, the Republicans, that was a great mistake that should never have happened. And I think this thing with Stormy Daniels and so forth is nobody’s business. And we’ve got other business at hand that we need to deal with.

… On this thing with Stormy Daniels and so forth: This stuff happened 12 years ago. This isn’t behavior that has taken place since he’s been president. These things happened long before he became president. That doesn’t make it right. And I don’t defend those kinds of relationships he had. But the country knew the kind of person he was back then, and they still made the decision to make him the president of the United States.

So Trump’s adultery is no one’s business even though it violates biblical morals… but Graham has no problem at all butting into the business of two men in a loving relationship wanting to get married or a single woman trying to obtain an abortion.

Remember: He challenged Obama’s faith because he was born to a Muslim father… but Trump’s adultery, which happened 12 years ago, is too old to matter?

Are there any morals that Graham and other white evangelicals think matter more than having an “R” after your name? Or is being a Republican an automatic pass on the things that make evangelicals act holier-than-thou?

And not all of Trump’s corruption is in the past! The whole reason his administration is mired in scandal is because of decisions he made (allegedly) during and after his campaign. The policies he’s pushing now are hurting the poor, breaking up families, and harming the very planet we live on.

Not that Graham will say anything about that, because he doesn’t give two shits about what Jesus said when it comes to politics. He just likes the access and power and the hope that Trump will continue appointing right-wing judges who might fulfill his wildest fantasies of making life a living hell for women and LGBTQ people.

Never trust anything an evangelical says about Jesus if they also tell you Franklin Graham is admirable.

***Update***: Thanks to everyone who pointed out this article Graham wrote for The Wall Street Journal in 1998, in which he said of President Bill Clinton:

If he will lie to or mislead his wife and daughter, those with whom he is most intimate, what will prevent him from doing the same to the American public?

Private conduct does have public consequences. 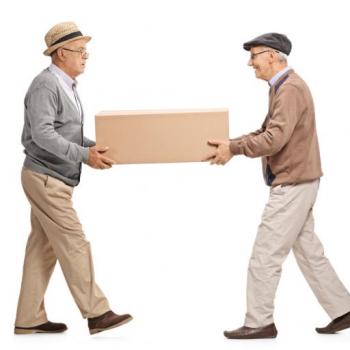 May 5, 2018 93-Year-Old Man Foolishly Thinks His Petition Will "Put Prayer Back in Schools"
"Which is on par for a death cult."
muttpupdad White Evangelicals Are Still Major Obstacles ..."
"Thanks have yet to figure out the work around"
Thomas Grove MAGA Pastor: Soros Ruined South Africa ..."
"I agree. I've often wondered that myself. And the hatred some of these preachers exhibit ..."
Tacoma Atheist Hate-Preacher During Crowded Easter Service: “Take ..."
"Spitting Image? Here tis (you might have to unmute it to hear it):https://www.dailymotion.com..."
NOGODZ20 MAGA Pastor: Soros Ruined South Africa ..."
Browse Our Archives
What Are Your Thoughts?leave a comment