Watch This MN Legislator Explain Why “In God We Trust” Doesn’t Belong in Schools May 4, 2018 Hemant Mehta

Minnesota is the latest state to consider letting public schools put the words “In God We Trust” on the walls. It’s an amendment to a larger omnibus education bill, and since there’s a lot of important material in this legislation, there’s a strong likelihood this faith-based addition will just get dragged over the finish line.

Putting those godly posters on school walls wouldn’t be mandatory, just optional, which kind of makes this whole debate moot. Still, you have to wonder: Who is this helping?

Nobody, of course. This is just another way to promote Christianity through the government. So let’s state the obvious: The “In God We Trust” posters are useless. Not only is promoting religion not the job of public schools, no students will receive a better education because they’re putting their faith in supernatural nonsense. (If you’re praying before an exam, you should’ve studied harder.) And even though it’s our national motto, it still sends a horrible message, as if you have to believe in God to be a True American.

On Tuesday, that was the issue being debated: Should SF 3086 include the bit about allowing those religious posters in schools?

What shocked me was what one of the dissenting senators said about the amendment. State Sen. John Marty, a church-going man himself, spoke out against “In God We Trust” for some incredible reasons.

… I would like to say: I oppose this amendment. One of the reasons I think Senator [Ron] Latz articulated… he was responding to something Senator [Dan D.] Hall said about 79% of Americans believe in some Supreme Being, which means 21% do not. And I would speak against it for the sake of the 21%, who, this is clearly not something that is welcoming or encouraging or comfortable for them. So I speak against it for their sake, and also for a lot of us in the 79% who do believe in a God but who happen to think that a government-sanctioned motto doesn’t strengthen our religion but it demeans and devalues and cheapens our religion.

So I oppose posting of that motto in our public schools — certainly a mandate for the schools to do that.

I even would strongly make the case that we ought to not have that motto, something we can’t change, on our money! The God I believe in, the God I worship, made a big point about fighting against power and money. Taking money-changers in the temple and pulling a whip of cords together and driving them out, overturning their money tables. So the guy who spoke against money — and the money I carry in my wallet has to say “In God We Trust”? I think that’s offensive!

The God I believe in, Mary sings a song about how He’s filled the hungry with good things and sent the rich empty away. I don’t want that motto on our money. I don’t want it in our public schools.

A government-sanctioned motto is not a way we strengthen religion. You go to some Scandinavian countries where they have an official religion. Yeah, everybody believes that everybody’s a member of the church. Nobody goes to it, but they all have it because the government sanctions it! I don’t think a sanctioned government, sanctioned motto belongs in our schools. I urge you to reject the amendment.

Wow… now that’s what a secular ally looks like. He didn’t focus on how the phrase was useless. Instead, he argued how it was insulting to his faith to have government sanctioning religion, even via a seemingly innocuous motto. He also defended all those “Nones” who have no religious beliefs, spoke out against the phrase appearing on our money (since the Bible has a lot to say about Jesus versus rich people), and argued that merging church and state was bad for churches.

You rarely hear that much sense coming from a politician when it comes to a religious matter.

Unfortunately, the amendment was adopted on a 38-29 vote. The entire bill eventually passed the State Senate 42-25.

Marty voted “No” both times. 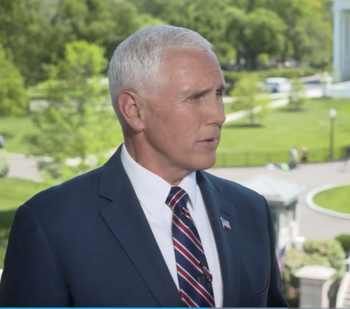 May 4, 2018
Mike Pence Says Michelle Wolf’s Jokes About Him Were "All Joy”
Next Post

May 4, 2018 Chaplain Who Blocked Atheist Invocation Keeps Job, Wins War Against Paul Ryan
Browse Our Archives
What Are Your Thoughts?leave a comment