Angelo Stagnaro doesn’t trust atheists. Why would he? They excel, he says, at “hypocrisy, lies, theft and violence.” And so, when the freelance magician and mentalist isn’t doing cold readings, he likes to upbraid the godless in the National Catholic Register.

This week, Stagnaro is at it again, with a hard-trolling article about the dismissal of David Silverman from American Atheists. He doesn’t just lay into Silverman (who’s more or less fair game considering what we learned about his alleged misbehavior a few weeks ago); as is Stagnaro’s wont, he enthusiastically pillories all non-believers. 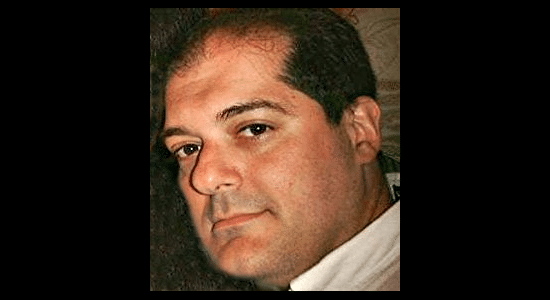 When he first heard about Silverman’s ouster, Stagnaro says,

I wasn’t a bit surprised.

That’s only the first sentence, and the confirmation bias is already thick on the ground.

Apparently, multiple women have made accusations against David Silverman, President of “American Atheists, Inc.” — the premier association, as they claim, of non-believers. It was founded by Madelyn O’Hair.

By the way, O’Hair’s first name was Madalyn, not Madelyn. Details don’t matter to Stagnaro, as we’ll see.

The Catholic League … pointed out that Silverman is being investigated by the very same board for allegedly not disclosing “financial and personal conflicts of interest relating to the promotion of his book, Fighting God: An Atheist Manifesto for a Religious World, and the appointment to a senior position of a woman with whom Silverman was allegedly having a sexual relationship.” Years earlier, O’Hair also misappropriated funds from American Atheists.

Stagnaro says correctly that the investigation into Silverman is underway and that it focuses in part on possible financial wrongdoings. Then, with the assertion about O’Hair, he makes it seem as if both she and Silverman are known embezzlers.

In fact, the AA founder, kidnapped and murdered in 1995, was never charged with theft or fraud, much less convicted. Neither American Atheists nor external auditors ever found that O’Hair had stolen or misappropriated money. Sure, there were rumors aplenty, mostly focusing on a mysterious New Zealand bank account that belonged to O’Hair. Reportedly, it had almost a million dollars in it. It’s not clear where the money came from, although the makers of the 2017 Netflix biopic about O’Hair, The Most Hated Woman in America, juiced up the script by making it seem she pilfered it from AA. Possible, but unproven.

The organization itself had to set the record straight last year, saying in a statement, “We have seen no credible evidence that there was financial impropriety on the part of the O’Hairs as was implied in the film.”

Despite the Biblical commandment against bearing false witness, Stagnaro can’t be bothered to stick to the known facts, substituting his most malicious suspicions instead.

Perhaps he got confused by the fact that O’Hair’s hire David Roland Waters, who would become one of her abductors and killers, had stolen $54,000 and some bonds from American Atheists. Waters was charged, tried and convicted for that crime (and later for his part in the murders of O’Hair and two of her family members — her son Jon Murray and granddaughter Robin Murray O’Hair).

None of this [the Silverman dismissal] should shock anyone. Hypocrisy, lies, theft and violence have been the very definition of atheism ever since its public debut at the Reign of Terror. It’s odd that secularists prefer to call the period as the dawn of the Age of Enlightenment. However, as the term “Reign of Terror” suggests, atheists weren’t throwing a tea party. In fact, they killed 40,000 people, mostly Catholics, for the sake of “rationalism.”

There’s a lot to unpack here. The Reign of Terror refers to the bloodthirstiest part of the French Revolution as it unfolded at the end of the eighteenth century under the madman Maximilien Robespierre. Stagnaro implies that Robespierre was an atheist. That’s bizarre in the extreme, because Robespierre hated atheism. He and his henchmen opposed France’s dechristianization and fought to establish a national deist religion called the Cult of the Supreme Being — a faith that sought to affirm, in Robespierre’s words, “the existence of God and the immortality of the human soul.” Some atheist!

Incidentally, the Age of Enlightenment started around 1685, more than a full century before the French Revolution that Stagnaro thinks is the “dawn” of that period. That he believes atheism didn’t emerge until the time of Robespierre’s guillotine goons leaves further doubt about his grasp of historical facts; the history of godlessness goes back to at least the sixth century B.C.

With regard to atheists supposedly being defined by thievery, lies, etc.: Were Stagnaro to express a similarly bigoted, broad-brush vituperation of another outgroup — let’s say, Jews? — there would surely be severe pushback from the civilized subsets of society. Atheists, by contrast, are safe to libel.

Apparently, the American Atheists were told of one of the accusations against Silverman, and yet did absolutely nothing. This is odd, as fundamentalist atheists tend to favor that the leaders of the Catholic Church be imprisoned for not acting immediately upon each and every accusation, verified or otherwise, against any Catholic priest, anywhere or at any time.

The truth is that in dealing with Silverman, American Atheists wasted little or no time. The AA board suspended him when it became aware of possible financial improprieties, and fired him just three days later, after sexual-harassment accusations against Silverman had begun to surface.

Contrast that with the Catholic Church’s infamous, infuriating pattern of decades-long secrecy, denial, gaslighting, coverups, and obstruction when it comes to the sexual child abuse epidemic that still festers in its midst.

This hypocrisy is part of a long tradition. As Bill Donohue correctly points out in his press release, Madalyn O’Hair was also a sexual deviant and a nutjob who barely had any control over her emotions or bodily functions.

I could parry that the Catholic Church certainly knows of “deviants and nutjobs,” but that would be stooping to Stagnaro’s unremarkable level. I trust he knows that ad hominem attacks are the lowest form of debate — well, ex aequo, I suppose, with slinging accusations based on conjecture and rumors.

As for Madalyn O’Hair’s “bodily functions,” Stagnaro must be referring to this characteristically blunt quote of hers. It’s calumny on his part to pretend that it means O’Hair didn’t have control over voiding her bowels or bladder. How can this not be well over the line for any publication with a modicum of decency?

In addition to destroying nearly every other atheist organization in the United States in an attempt at consolidating power, she also stole a tremendous amount of money from her own organization and had made plans to abscond to New Zealand, which I presume didn’t have an extradition treaty at the time.

We already went over the lack of substance here. By the way, attacking someone who is also a homicide victim doesn’t exactly class up those ad hominems.

On the topic of extradition, Stagnaro could’ve skipped the presuming. It’s not hard to find out that New Zealand and the United States have had a treaty in place since 1970, 25 years before O’Hair’s supposed attempt to “abscond.”

The current atheist board of directors has refused, thus far, to offer any details about Silverman.

AA’s investigation of Silverman has been underway for about three weeks. No one can know how many details will be revealed in the eventual report, or whether AA will make it public in its entirety; but in the meantime, it’s prudent for the board to stay relatively tight-lipped. If Stagnaro were in a similar situation as the AA board members, he’d no doubt do the same. And were he in a similar situation to Silverman’s, you can bet your holy host that the Catholic scribe would appreciate not being prematurely thrown under the bus of public opinion. Facts are good. Speculation and innuendo, less so.

But I’m more curious as to why our nation’s media has refused to bring this scandal to the national attention. How many other atheists’ crimes are escaping our notice?

Not many, comparatively speaking.

I know what every atheist is thinking right now: “But what about the priestly sex scandals?” The facts of the case aside, this fallacious statement takes advantage of the logical error known as Argumentum ad te quoque and no intelligent, logical and sane person would ever make it.

While I almost admire the blustery rhetorical trick that Stagnaro employs to try to prevent broadsides against the Catholic Church, it fails.

The Church and its die-hard adherents have long ago lost the moral high ground. They have no standing to lecture other groups on sexual improprieties, something that Stagnaro, were he honest, would have to cop to. I’ll return to this in a moment.

It’s odd that atheists don’t want to brag about how they threw the president of America’s “premier” atheist organization out on his bum. Aren’t they supposed to be angry at all sexual molesters?

If the comments on this site are any guide, atheists have no problem with being pissed at Silverman.

Perhaps they are only angry at the small percentage of Catholic priests who turned out to be abusers and were rightly punished for their crimes.

That “small percentage” is credibly estimated to have made two million, perhaps two and a half million victims. Relatively few of those godly child rapists have in fact been “punished for their crimes”; many are dead, or are spending their twilight years in happy retirement; most likely, others are are still being shuffled around and shielded by higher-ups right now.

I do not rejoice in the allegations against David Silverman.

Really? ‘Cause it looks to me like Stagnaro’s glee is virtually dripping off the screen.

But I am glad that the atheist victims of his atheistic hypocrisy may finally find justice, just as I hope for the victims of a long list of other atheist sexual abusers.

Fine, let’s do the math. There are roughly 1.2 billion atheists and nones in the world, about the same as the total number of Catholics. Off the top of my head, from my perch in the U.S., I can think of three prominent atheists who’ve been accused of unwanted sexual behavior towards adult females. If true (al three have denied it), their behavior is certainly wrong, condemnable, and possibly criminal. Even if gropers and pawers among atheist leaders numbered thirty, three hundred, or three thousand, it still doesn’t come close to a Catholic culture that has allowed between 23,000 and 40,000 priests worldwide to sexually molest minors — children! — in the last three to four decades alone.

That’s not a tu quoque. That’s a reminder that (a) the scale, (b) the sheer numbers, and (c) the nature of the crime are so vastly disproportionate between the two groups that comparing them, and then pretending that non-believers are the real lawbreakers, deserves a prize for absurdity.

Stagnaro’s career as a magician calls for a repertoire of sleight-of-hand deceptions. It’s regrettable that those cheats and ruses carry over into his writing, revealing him to be a purveyor of bad faith, dirty tricks, and a top-hatful of mendacity.

P.S.: Here’s another amazing diatribe of Stagnaro’s, asserting that if atheists had been left unopposed by godly folks,

… they would have easily wiped out the entire CURRENT POPULATION OF THE WORLD. 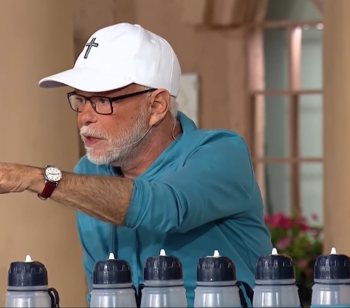 May 3, 2018
Jim Bakker: Buy My Condos in Branson! NASA Says They'll Be Safe in the End Times
Next Post 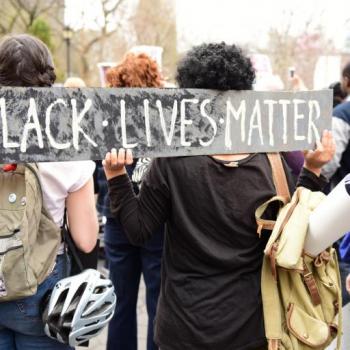 May 3, 2018 Evangelicals Care More About Black Abortions Than Black Lives
Browse Our Archives
What Are Your Thoughts?leave a comment