Liberty University is the Largest Christian School (If You Ignore the Numbers) May 1, 2018 Hemant Mehta

On Friday, Jack Jenkins of Religion News Service published a rather innocuous piece that deflated the myth that Liberty University — the school run by Jerry Falwell, Jr. — was the largest Christian university in the country. It’s something they touted on their website and special events. It was a point of pride.

But Jenkins said it wasn’t true.

And what is now the largest Christian university? According to federal enrollment data Liberty also cites, that title in the U.S. — and perhaps the world — belongs to Grand Canyon University, a for-profit Christian school in Phoenix. Like Liberty, it has benefited from heavy investment in online education.

A second Liberty official later claimed the number is “more than 100,000 students,” and pointed to the latest iteration of the data — from the 2015-2016 [Integrated Postsecondary Education Data System database] — which reported Liberty’s “12-month unduplicated headcount” enrollment (meaning every student should be only counted once) to be 109,921.

The same database release puts Liberty’s enrollment at more than a thousand students less than GCU’s, which is listed as having an enrollment for that same time period of 111,211.

It’s one of those things you just accept and move on from, since it doesn’t really matter all that much. Quality trumps quantity, right? (Granted quality is a major problem at both schools, given their biblical basis for knowledge.)

But Liberty isn’t letting it go. In a follow-up piece posted yesterday, Jenkins described how Falwell was attempting to cherry pick his way back to the top spot.

One of the ways he’s doing it? Claiming that GCU isn’t really Christian since, for example, it doesn’t force students to accept Young Earth Creationism.

“Our definition of a Christian university only includes universities who hire faculty who adhere to fundamental Christian doctrine. GCU does not. Liberty does,” Falwell said in a statement provided to RNS.

GCU officials said they do require faculty to sign a statement saying they understand the school’s Christian values.

Essentially, Falwell believes his form of Christianity is the only True Christianity™. That means Catholic schools, progressive Christian schools, and even a school like GCU that doesn’t hold fundamentalist positions on everything are practicing some kind of heresy.

What about the definitive IPEDS data? Falwell dismissed that, too, saying Liberty enrolled more full-time students… which is nice, but totally irrelevant for the government’s database.

… in a statement provided by Liberty, Falwell suggests that because his school has a larger number of full-time students, it could still claim to be the largest Christian university. For 2015-2016, the IPEDS listed the “12-month equivalent full-time enrollment” for Liberty at 65,290, compared to GCU’s 63,350.

Falwell treats enrollment numbers much like he treats the Bible: He chooses to ignore the entire thing in favor of carefully selected bits. After all, when you cherry pick information, you can make it say anything you want!

Ultimately he came up with a compromise that defies math:

“If GCU requires faculty to affirm a strong Christian doctrinal statement and enrolls more students by total headcount while LU enrolls more FTEs (full-time enrollment students), then it would be fair for both schools to claim to be the largest Christian university in the world,” he said in the statement provided to RNS.

“In any event,” Falwell added, “Liberty will remain the largest non-profit Christian university in the world and the most prosperous and successful academically and athletically by almost any metric for years to come in our opinion.”

Everyone’s the largest Christian university! (Even though some are more Christian than others… *wink wink*)

What this likely means is that Liberty will keep calling itself the “world’s largest Christian university,” even if that requires bending the definition of numbers. But who cares, right? When they distort the Bible as much as they do, misleading people with statistics is just second nature.

May 1, 2018
Highest-Ranking Vatican Official Charged with Sex Abuse Heads to Trial
Next Post 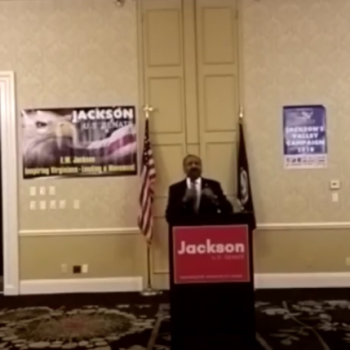