E.W. Jackson is a Christian activist who failed in his run for Virginia’s Lt. Governor and is now hoping to be the Republican challenger for Tim Kaine‘s Senate seat.

Lucky for his opponents, he has a habit of saying the worst possible things in any given situation, like last year when he said Alabama voters should support Roy Moore, despite claims of child sexual abuse, because the alternative would lead to the worst kinds of Christian persecution.

Jackson’s latest bit of idiocy? Over the weekend, he claimed that we need to stop blaming Americans for slavery because it was really Muslims who started it.

“We must reject the idea that America has ever been a racist country,” Jackson declared. “It has not.”

Admitting that while there have been racists and racism in America, Jackson insisted that “America has never been a racist country” because “it was actually Arab Muslims who were the first to enslave sub-Saharan Africans.”

There’s a lot of stupid in there.

Slavery was around long before Islam came into existence, and even if we grant that Americans didn’t start slavery, our nation perpetuated it, didn’t legally abolish it for a long time, and still maintains laws that specifically hurt people of color.

You would think a black man in America would understand that better than others… but he’s running as a Republican, so revisionist history is part of the platform. Jackson’s the sort of person who would claim he’s part of the anti-slavery party because of Abraham Lincoln. It’s a very convenient lie as long as you ignore everything that’s happened in the past century.

And pretending that “Arab Muslims” began slavery is a convenient lie that requires you to just ignore all of human history.

May 1, 2018
Liberty University is the Largest Christian School (If You Ignore the Numbers)
Next Post 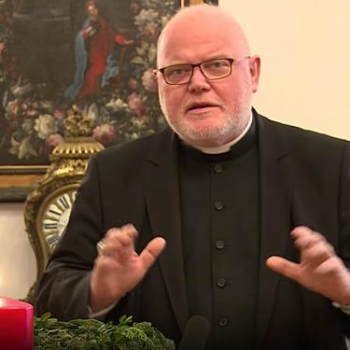 May 1, 2018 This Man Hates Bavaria's New "Display the Cross" Law. Surprise: He's a Cardinal.
Browse Our Archives
What Are Your Thoughts?leave a comment