***Update***: The school is no longer giving girls “Modesty Ponchos.”

Divine Child High School, a private Catholic school in Michigan, has a message for all the female students planning to attend Prom on May 12: Don’t wear anything even remotely revealing or else you’ll be given a “Modesty Poncho” at the door. 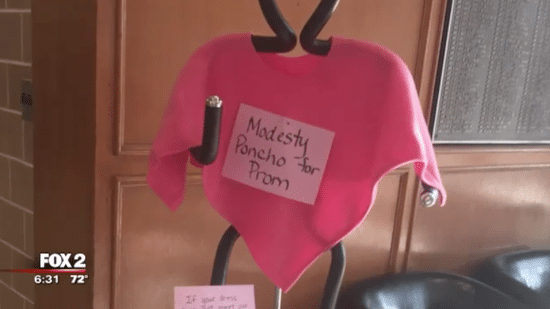 The ponchos are on display on mannequins inside the school. A note is attached to them that reads: “If your dress does not meet our formal dance dress requirements — no problem! We’ve got you covered — literally. This is our Modesty Poncho, which you’ll be given at the door. 🙂“

The problem with this — okay, one of many problems — is that there’s no single definition of “immodest.” What about a curvy girl whose dress isn’t really low cut but is slightly revealing? Does she have to wear this shoulder condom?

Twitter user @JennyLessnau wrote: “I really have a problem with the fact that if you happen to have big boobs at DC, and wear a dress that is even a little low, that will warrant a ‘modesty poncho’ EVERY time. they basically body shame girls if they’re bigger than a B cup.“

The theology teacher who came up with this idea, Mary Pat O’Malley, insists her motivation is pure: “We are trying to focus on the inner beauty and not draw attention to something that doesn’t need attention drawn to it…”

So… girls with cleavage don’t have inner beauty? They can’t dress in a way that makes them feel confident and comfortable?

One student who bought her prom dress months ago says she believes it’s modest, but now she’s having second thoughts:

Both Erin [Wade] and her mother believe the dress is modest. But when the modesty poncho made its appearance in the school’s front lobby early last week, Erin said, she became worried about the neckline. She’s now on the hunt for a new dress, with the May 12 prom just days away.

Why not just say girls need to wear burkas? That’s the end game here, isn’t it? Or better yet, instead of making girls wear the Modesty Poncho, why not make all the guys wear blindfolds? It’s the only way to stop them from sinning with their eyes.

No one’s saying the school doesn’t have the right to do this, but the rest of us have every right to mock administrators for their inability to let girls dress themselves. 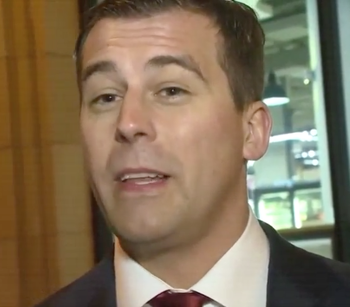 May 1, 2018
Anti-Semites Find Uneasy Refuge in GOP; Patrick Little Is the Latest Example
Next Post

May 1, 2018 Highest-Ranking Vatican Official Charged with Sex Abuse Heads to Trial
Browse Our Archives
What Are Your Thoughts?leave a comment