A reasonable person might say, “Leave your husband. No one deserves that kind of treatment, and no relationship like that is worth saving.”

Patterson didn’t say that. He didn’t even come close. 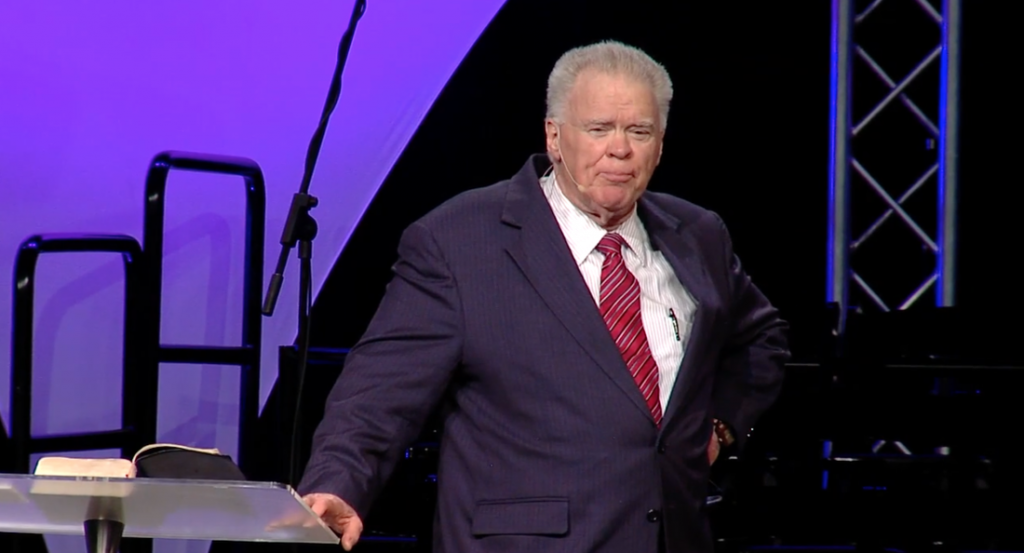 In leaked audio of that conversation, posted on The Baptist Blogger, Patterson gave a long and rambling response that didn’t include divorce as an option, but told the women to pray really hard about it.

An excellent question, and let me respond that it depends on the level of abuse to some degree. I had never in my ministry counseled that anybody seek a divorce. And I do think that’s always wrong counsel. There have been, however, an occasion or two when the level of the abuse was serious enough, dangerous enough, immoral enough that I have counseled temporary separation and the seeking of help. I would urge you to understand that that should happen only in the most serious of cases.

I would cite examples of it, but the examples that I’ve had in my ministry are so awful that I will not cite them in public. That’s enough to say, however, that there is a severe physical and/or moral danger that’s involved before you come to that. More often, when you face abuse, it is of a less serious variety, but all abuse is serious, and there are two or three things that I say to women who are in those kinds of situations.

First of all, I say to them that you must not forget the power of prayer. Just as one of your little children comes to you with a broken heart, crawls up into your arms, looks into your face, and with tears running down his cheeks, ask you to intervene in a situation, if you have anything in you of a loving parent’s heart at all, that will bring you to your attention, and you’re off and running.

Now if you then, being evil, know how to give good gifts to your children, how much more should your Father in Heaven do good to them that ask Him? Do not forget the power of consecrated, concentrated prayer. Get on your face before God and ask Him to intervene and He is a good and a dear Heavenly Father. And at some point he will intervene.

He then told a story of a woman who took his advice and prayed. It didn’t help much, given that he was still abusive, apparently punching her in the face. Take note of Patterson’s reaction to that.

I’ll just give you one brief example of it. I had a woman who was in a church that I served in. She was being subject to some abuse, and I told her, I said, “Alright, I want you to do this, every evening, I want you to get down by your bed just as he goes to sleep. Get down by the bed, and when you think he’s just about asleep, you just pray and ask God to intervene. Out loud, quietly.” But I said, “You just pray there,” and I said, “Get ready because he may get a little more violent, you know, when when he discovers this.”

And sure enough, he did. She came to church one morning with both eyes black. And she was angry at me — and at God in the world for that matter. And she said, “I hope you’re happy.” And I said, “Yes ma’am, I am.” And what she didn’t know when we sat in church that morning was her husband had come and was standing at the back — the first time he ever came. And when I gave the invitation that morning, he was the first one down to the front. And his heart was broken. He said, “My wife’s praying for me and I can’t believe what I did to her.” And he said, “Do you think God can forgive somebody like me?” And he’s a great husband today. And it all came about because she sought God on a regular basis.

Remember: When nobody else can help, God can. And in the meantime, you have to do what you can at home to be submissive in every way that you can and to elevate him. Obviously, if he’s doing that kind of thing, he’s got some very deep spiritual problems in his life. And you have to pray that God brings him to the intersection of his life, those people and those events that need to come into his life to arrest him and bring him to his knees.

She had two black eyes but it was okay because her husband came to God.

It’s sickening that any religious leader, much less the man who was leading the Southern Baptist Convention at the time, would tell women to just put up with it and pray because everything would magically get better if they did.

After that clip began making the rounds again this weekend — it had apparently been out there for years — Patterson issued a statement defending his comments and saying they were taken out of context.

For the past several months, my life and the lives of my family have been subjected to rigorous misrepresentation. Even had I done some hideous wrong of which I am accused, my wife, children, and grandchildren have not and do not deserve such mischaracterization.

For the record, I have never been abusive to any woman. I have never counseled or condoned abuse of any kind. I will never be a party to any position other than that of the defense of any weaker party when subjected to the threat of a stronger party. This certainly includes women and children. Any physical or sexual abuse of anyone should be reported immediately to the appropriate authorities, as I have always done.

I have also said that I have never recommended or prescribed divorce. How could I as a minister of the Gospel? The Bible makes clear the way in which God views divorce. I have on more than one occasion counseled and aided women in leaving an abusive husband. So much is this the case that on an occasion during my New Orleans pastorate, my own life was threatened by an abusive husband because I counseled his wife, and assisted her, in departing their home to seek protection. In short, I have no sympathies at all for cowardly acts of abuse toward women.

Yes, he’s the real victim in all this because an abusive husband once threatened him, even though he told other battered women not to leave their husbands.

He never said in that clip that women should report their abusive husbands to the authorities. And no one ever accused him of being violent himself… though telling women to stay in abusive relationships can absolutely be construed as condoning abuse.

What about that story of the woman who prayed, got beaten, but it was okay since her husband found God? He didn’t back down from that story. Instead, he just said it was “unwise” to tell it in this “climate” and “culture.”

For sharing this illustration, especially in the climate of this culture, I was probably unwise. However, my suggestion was never that women should stay in the midst of abuse, hoping their husbands would eventually come to Christ. Rather, I was making the application that God often uses difficult things that happen to us to produce ultimate good. And I will preach that truth until I die.

That’s… not helping. The problem with his story wasn’t the timing or that it’s being rehashed in the #MeToo era. The problem is his story.

Patterson wasn’t any more apologetic in an email to the Washington Post. When asked for comment, he said it’d be foolish of him to say anything else at this point:

“75 years of experience teaches me (though a slow learner) that no one’s life is made materially better by entering these discussions. I have said enough.”

Bullshit. He hasn’t said enough, because a genuine apology and admission of wrongness is nowhere to be found.

The Southern Baptist Convention hasn’t denounced his comments either. All you’ll hear from Southern Baptist leaders is some generic “Abuse is bad!” rhetoric without anyone saying, “Paige Patterson is a garbage human who was wrong when he told abused women to pray instead of seeking real help. From now on, we will make it explicitly clear that no relationship in which abuse is present is worth saving.”

Some Christians, however, weren’t afraid to call Patterson out:

One of the many things that disturbs me about this is the way Patterson puts ALL the responsibility on the woman to change her husband—while he’s beating her. Even if you hate divorce, this is a gross abdication of pastoral and legal responsibility. https://t.co/AbMmBQcA66

I’m pro marriage. Nearly 40 years of ups and downs to back that up. But when we as a church culture demonize divorce as the worst possible outcome – the sin of all sins – we truly have no clue on this ever loving earth what some people are enduring. We do not submit to abuse. NO.

Jonathan Merritt, the journalist who brought everyone’s attention to The Baptist Blogger’s audio, also notes that saying despicable things isn’t a one-time problem for Patterson. Just check out this sermon he gave in 2014. He tells a story of two teenage boys who were hitting on an underage girl… something he jokingly defended as biblical:

… About that time, a very attractive young co-ed walked by. And she wasn’t more than about 16, but mmmmmm. Let me just say, she was nice. As she walked by, they didn’t think that momma was paying any attention to them, and one young man turned to the other one and he said, “Man, is she built.”

In the middle of the synod, she stopped, wheeled around, slapped a hand over his mouth, loosened his teeth, said, “Young man, don’t you ever say anything like that again. If you do, I’ll mop up the face of the earth with you!”

I saw my opportunity. I said, “Ma’am, leave him alone. He is just being biblical. That’s exactly what the Bible said.”

Bible-based sexualization of a 16-year-old girl and laughter from the audience. (I must not get Southern Baptist humor.)

If anything, that video just corroborates what that audio from 2000 told us: Patterson thinks women are objects for men to treat however they want. Even certain forms of abuse aren’t enough for him to suggest to women they should leave their husbands. It’s up to women to pray hard enough to change their husbands’ behavior… the onus isn’t on men to change it themselves. That’s the Southern Baptist way.

It’s just a disgusting thing to say or think, and it’s par for the course for Southern Baptists who believe in complementarianism, the biblical doctrine that says men are always the heads of households and women must always be submissive.

Patterson isn’t just some fringe guy. He’s the head of a theological seminary — a guy in charge of educating young men. He’s also speaking this June at the Southern Baptist Convention’s annual meeting, which is a way of saying they’re celebrating him as a man to admire.

The problem, then, isn’t one guy. It’s the entire belief system that produces men like Patterson and considers them role models.

Meanwhile, women in this church continue to get abused and told to stay and pray. 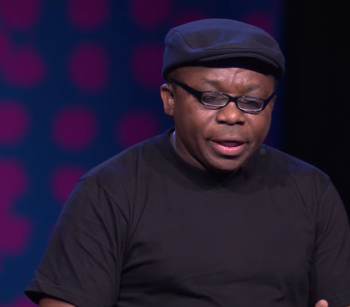 April 29, 2018
Humanist Leo Igwe Shares His "Proactive Approach to Life" in This TED Talk
Next Post 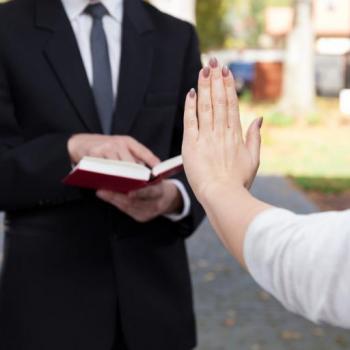