Donald Trump Has an Uncritical, Unquestioning Home in Christian Television

What do you do when you’re Donald Trump and you want to get your message out to the base, but the people on FOX News are too difficult to face?

Simple. You go to Christian television, where you get all of the benefits with far less negative attention since your critics probably aren’t watching. That’s the gist of a new POLITICO piece by Ruth Graham:

For the White House, the relationship is arguably even more useful. Christian broadcasters offer an unmediated channel to the living rooms of a remarkably wide swath of American believers, an audience more politically and racially diverse than you might expect. [Trinity Broadcasting Network] alone has more local stations to its name than Fox or the three major networks…

It’s not just one channel or one show, either. Between Pat Robertson, David Brody, Jim Bakker, Mike Huckabee, and others, Trump and members of his administration have a direct line to communicate with their base with none of the critical questions that might come from more professional interviewers. The hosts are in no rush to alienate the one president who pays them the lip service and gives them the attention they long for.

No wonder white evangelical support for Trump is at an all-time high. The rest of us who aren’t getting our news filtered through so-called Christian leaders understand what’s at stake. We witness the never-before-seen levels of corruption. We see how Trump’s policies are hurting decent Americans.

That’s not the case for people convinced that any criticism of Trump is just another form of Christian persecution. And these hosts are doing everything they can to perpetuate that myth. 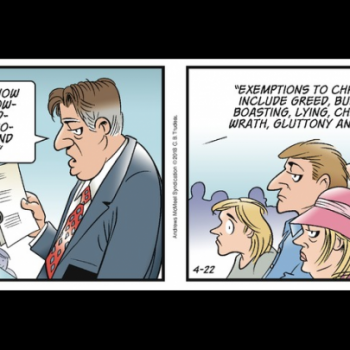 April 22, 2018
Lowering the Bar in White Evangelical Churches
Next Post 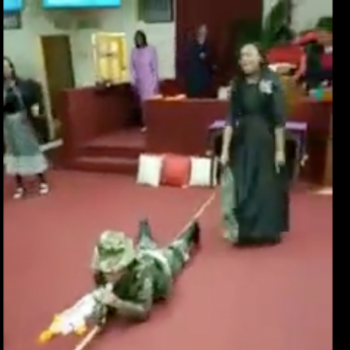 April 23, 2018 This Pastor "Shot" Church Members to Show Them They're Spiritual Warriors
Browse Our Archives
What Are Your Thoughts?leave a comment