The Rev. Timothy Bourman, along with 142 other passengers and five crew members on Southwest Airlines Flight 1380, survived what could’ve been a major plane crash this week. Engine one of the Boeing 737 malfunctioned in mid-air, blasting debris through a window. The sudden air pressure imbalance nearly sucked one unlucky passenger out of the opening and into the thin, frigid air. That woman died of blunt-force trauma, but the crew’s sangfroid saved the lives of everyone else on board.

Bourman, interviewed by Anderson Cooper on CNN, says he put his faith in Christ, and that the Savior came through. 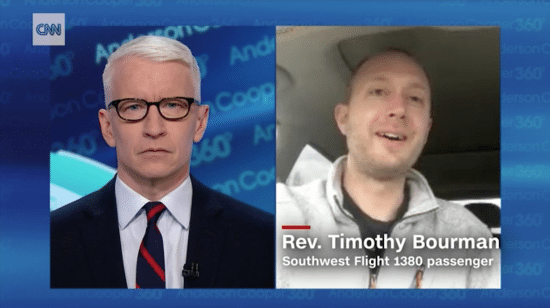 What mystified me was the reverend’s apparent insouciance about what was going to happen to the plane and everyone in it. Bourman isn’t shy to admit that he has real faith™, and thus,

“I knew that my God was going to take care of me one way or another,” he said. … “[I] knew that whatever God’s plan for me was, I was going to be blessed either way.”

Lovely. Heads, we live and that’s fantastic. Tails, all 149 of us die and that’s marvelous too, because then I get to hang out with God and Jesus for eternity.

It’s fortunate in the extreme that the flight’s nerves-of-steel captain, Tammy Jo Shults, didn’t see things Bourman’s way. She acted without a trace of fatalism or happy resignation. She fought to get that 737 under control, and she did.

You wouldn’t know that from the CNN piece. Jesus gets brought up twice. God, three times. By contrast, Shults or her first officer, Darren Ellisor, don’t merit a single mention in the article.

One more thing. The passenger who died, Jennifer Riordan, was a practicing Catholic. Maybe, through her pain and her panic, she prayed too, if she had the time. Not that God listened, natch. The Big Guy is capricious that way.

Every time survivors praise their deity for letting them live, and shrug off the fact that fellow believers of equal worth died in the same calamity, I can’t help but think less of them, less of their faith, and less of their God. Their grating gratitude and nose-thumbing piety make me want to run, not walk, in the opposite direction. 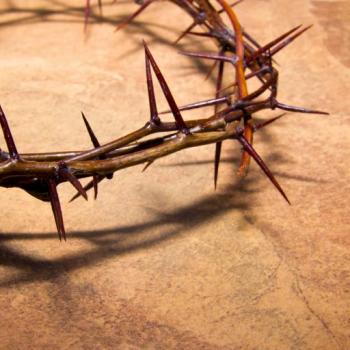 April 21, 2018 Pseudo-Persecuted Christians Now Think There's an Expiration Date on Their Faith
Browse Our Archives
What Are Your Thoughts?leave a comment