Ark Encounter doesn’t publicly release its attendance numbers. It doesn’t have to. But there’s a conflict between what atheists have reported during their own visits (it’s relatively empty when they’ve gone) and what Ken Ham says when he’s bragging online. He always suggests business is booming.

Last year, we finally got our first hints about actual attendance numbers, and it was all thanks to an ordinance passed by the city of Williamstown, Kentucky.

You may recall that officials called for all ticket-taking attractions in the city to pay a surcharge of $0.50 per ticket as a “Safety Fee” to help pay for fire trucks, police cars, etc. — the very things that make the city a safer place for residents and tourists. While there are two other attractions the fee applies to, Ark Encounter would be the lion’s share of the income, and even if Ken Ham wanted to keep his attendance numbers secret, the city’s Safety Fee amounts were a matter of public record.

Dan Phelps, President of the Kentucky Paleontological Society, has long been a watchdog of all things Ark Encounter, and he got into the habit of asking for those Safety Fee public records. In December, he received a response, also giving him the official attendance numbers for Ark Encounter for July, August, September, and October of that year:

At the time, we concluded a few things: The attendance figures were solid in the summer and then took a dive when the school year began. (No surprise there.) We predicted things would get worse as the weather grew colder (even in Kentucky) and as the school year progressed.

Thinking long term, I also felt these numbers weren’t going to be going up. After all, if you’ve seen the Ark once, there’s really no need to see it again.

Ham also wrote in a piece for the Courier-Journal that he expected “1.4 million to 2.2 million” visitors over the second year of the Ark’s existence. That assumed an average of about 117,000 visitors a month, a bar he beat in July but not again. He was clearly counting on higher numbers later in his fiscal year (which begins in July).

So what’s been going on since then?

Thanks to Dan, we can fill in more of the numbers from November through March of this year. Here, again, is the monthly attendance follow by the amount paid for the Safety Fee.

Those numbers, relatively to what Ham claimed he would get, are pathetic. Notice that January didn’t even bring in a tenth of the visitors they had in July. The drop-off is steep. No doubt the numbers will be higher over the next few months, given the weather, spring breaks, and the end of the school year, but will he really hit his goal?

Let’s do some quick math.

There’s no way that’s going to happen. Not even close.

Ham brought in 1.1 million people in the first year of the Ark. There’s a good chance he may not even top that in the second year.

This is a horrible sign for the Ark and the people who gave up so much to have it built in Williamstown. (That also signals, in a perverse way, a victory for science.) You would expect numbers for an attraction like this to be going up and up and up in an attraction’s first few years since everyone’s finally getting a chance to see it for the first time. Instead, it looks like the Ark may have already hit its peak in the first year.

April 21, 2018
Christian Group Prays to Protect Donald Trump From the Curses of Witches
Next Post 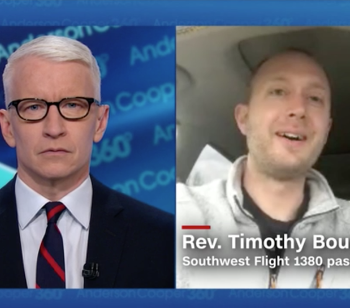 April 21, 2018 Pastor Who Survived Fatal Flight Says He Would've Been Blessed "Either Way"
"There was some grumbling about it, I admit ;-)"
TSexplains it all When a Muslim Woman Was Harassed ..."
"Merida could rock a head covering..."
starskeptic When a Muslim Woman Was Harassed ..."
"I can’t guess what you believe,True. And yet that didn't stop you from trying.Based on ..."
blasphemous_kansan An Ohio Church That Had a ..."
"It's not really very new. I've seen it deployed for years. And no, the people ..."
Nomad Rick Wiles: People Vaccinated with “Satanic ..."
Browse Our Archives
What Are Your Thoughts?leave a comment