Downtown Manhattan now has the largest Chick-fil-A restaurant in the world: five stories, 12,000 square feet. Already, the line of customers sometimes stretches to the end of the block. 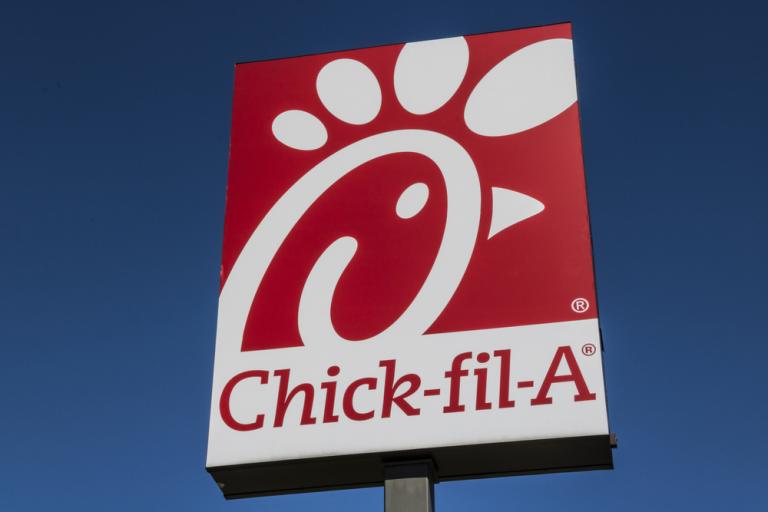 This isn’t to the liking of the New Yorker‘s Dan Piepenbring, who writes that

… the company has announced plans to open as many as a dozen more storefronts in the city. [It currently has four.] … the brand’s arrival here feels like an infiltration, in no small part because of its pervasive Christian traditionalism.

I’ve happily subscribed to the New Yorker for over two decades now, but this story made me scratch my head for so many reasons.

Are there Bible verses on the Chick-fil-A placemats? Large crosses on the walls? Fire-and-brimstone language on the receipts? Do you get a discount if you publicly pray to Jesus, a stunt this non-Chick-fil-A joint in North Carolina pulled a few years ago?

Chick-fil-A doesn’t hit its customers over the head like that, but Piepenbring knows for a fact that there is Christian iconography at the company’s corporate HQ, so he still gets to be somewhat offended.

Its headquarters, in Atlanta, are adorned with Bible verses and a statue of Jesus washing a disciple’s feet.

Its stores close on Sundays.

Is there truly anyone who gives a fig about either of those things? I mean, I don’t particularly love religious closing days, but they’re not worth fretting over as long as less devout competitors welcome you everywhere you turn.

Besides, if Piepenbring is worried about cooties emanating from Chick-fil-A’s supposedly “pervasive Christian traditionalism,” shouldn’t he be pleased that the chicken chain works its pernicious influence only six days a week, not seven?

Proselytism thrums below the surface of the Fulton Street restaurant, which has the ersatz homespun ambiance of a megachurch. David Farmer, Chick-fil-A’s vice-president of restaurant experience, told BuzzFeed that he strives for a “pit crew efficiency, but where you feel like you just got hugged in the process.” That contradiction, industrial but claustral, is at the heart of the new restaurant — and of Chick-fil-A’s entire brand.

Piepenbring doesn’t explain why he thinks the restaurant feels like a megachurch. If it’s because of the hugging metaphor, well, I didn’t know that hugs, or friendly service, are patented Christian inventions; nor did I realize that striving to make every customer feel warmly welcomed is objectionable to some.

The figure-of-speech hug is the only evidence Piepenbring brings to the table for his charge that the Fulton Street Chick-fil-A is like a huge house of worship. That sure makes it look like he visited with a head full of preconceived notions, and wrote his article accordingly, regardless of the facts on the ground.

Also, it’s one hell of a weird “ersatz” Christian church that closes on Sundays.

Of course, he has a much more salient point when he mentions the support for “traditional marriage” that Chick-fil-A’s conservative owners, the Cathy family, have always espoused.

C.E.O. Dan Cathy has been accused of bigotry for using the company’s charitable wing to fund anti-gay causes, including groups that oppose same-sex marriage. “We’re inviting God’s judgment on our nation,” he once said, “when we shake our fist at him and say, ‘We know better than you as to what constitutes a marriage.’” The company has since reaffirmed its intention to “treat every person with honor, dignity and respect,” but it has quietly continued to donate to anti-L.G.B.T. groups.

In 2015, the Daily Beast‘s Samantha Allen (who is gay and agnostic) wrote that

It’s not 2012 anymore [Dan Cathy’s commented in July of that year that he stands for “the Biblical definition of the family unit,” resulting in boycotts and other brouhaha]. … The LGBT movement as a whole is far from over but same-sex marriage is now legal nationwide, so it doesn’t exactly matter what Dan Cathy thinks about that particular issue.

The company’s new foundation also ended nearly all of its donations to anti-LGBT organizations in 2012, with $25,390 to the Fellowship of Christian Athletes as the only potential sore point.

So why are we — fellow LGBT folks and political allies — still living in the past?

Others contend that, in fact, a big heap of Chick-fil-A money still went to gay-hostile organizations as recently as last year. Recipients are said to have included the Salvation Army as well as a “Christian residential home for troubled youth” that depressingly links “all kinds of evil” in the family to “the explosion of homosexuality over the last century.”

To be fair, that kind of nonsense seems to be far from the reality of how Chick-fil-A’s operate at the local level. For instance, Orlando-area Chick-fil-A’s provided copious free food and iced tea to people who’d lined up to donate blood after the Pulse gay-nightclub massacre. (By the way, that act of kindness took place on a Sunday, when the chain’s restaurants weren’t even officially open.) Dan Cathy has intoned repeatedly that he’s a love-the-sinner-hate-the-sin kind of Christian who believes that everyone at Chick-fil-A is entitled to dignity and respect. There are few if any indications that that’s not true in the restaurants’ daily practice.

If Chick-Fil-A in fact continues to donate to deeply questionable Christian causes, the desire to eat elsewhere is fair enough and understandable. But Piepenbring goes well beyond making that assertion.

As is his right, he dislikes fast-food restaurants because he deems their offerings homogenous and their presence an indication of “deadening uniformity.” But then his prose turns a few shades darker when he writes that, like the cartoon cows from its long-running advertising campaign,

Chick-fil-A, too, does not quite belong here.

“Here” being, it appears, the largely secular canyons of Manhattan.

It might have been OK if he’d left it there. Instead, we get this:

Its arrival in the city augurs worse than a load of manure on the F train.

Combine that with the term “creepy infiltration” in the article’s headline, and with Piepenbring’s dread of Chick-fil-A”s “pervasive” Christianity, and it’s easy to see why his piece is generating a fair amount of well-deserved controversy.

If another matzo-ball joint or falafel franchise opened in Manhattan, can you just imagine the ruckus a mainstream magazine would unleash by stating that those restaurants “don’t quite belong here”? Can you honestly say you wouldn’t be dismayed, maybe even alarmed, if that magazine linked the owners’ Muslim and Jewish beliefs, respectively, to phrases like “creepy infiltration” and “worse than a load of manure”?

Piepenbring’s shabby piece in the New Yorker is hardly the kind of effort that will endear anyone to our secular principles. We condone or approve of it at our peril.

April 16, 2018
American Atheists Answers Follow-Up Questions After the Firing of Its President
Next Post

April 16, 2018 Catholic Church Defender Slams American Atheists for Lack of Transparency
""cancer culture"?Hemant - I like your unconscious mind!"
starskeptic Scamvangelist Jim Bakker: I Was “One ..."
"Thanks so much for that - you made my day!"
starskeptic Death Cult Pastor: One Day We’ll ..."
"The one I'm trying is Absolute Enable Right Click & Copy."
sinned34 Arkansas State Senate Unanimously Passes “Day ..."
"those are halberds, not spears! :pyou'll need better training if you want to be a ..."
formerly_known_as_piz****tii Even Pat Robertson Can’t Believe a ..."
Browse Our Archives
What Are Your Thoughts?leave a comment