A few months ago, my friend Camille Beredjick released a book called Queer Disbelief (which I edited and published), all about how the LGBTQ and atheist communities overlap, where the comparisons break down, how religion hurts (and helps!) LGBTQ people, and why atheists can’t ignore this issue.

Religion News Service just published a wonderful interview with Camille about the book. I really appreciated this answer she gave about from people caught between both worlds:

I spoke to one young man who is transgender and feels strongly called to be a priest. He spoke about the difficulty of maintaining his faith while coming out, and accepting the idea that the Catholic faith he grew up in would not likely be a safe place for him to pursue the priesthood. The way he put it was so beautiful. He said people cannot prove just by looking at him that he is a man, but it is something he knows he is and that gives him peace.

Likewise, he can’t prove that God exists or that he has a calling to be a priest, but he knows the peace and joy that God and that calling brings him. I thought that was a lovely way to put it.

I can’t recall hearing a story like that anywhere else, but this book is full of them. They helped me, at least, realize that the “battle lines” are never as clear as we might think. Organized religion may not help people like that young man, but atheists would be foolish to assume he’s eager to shed his faith. 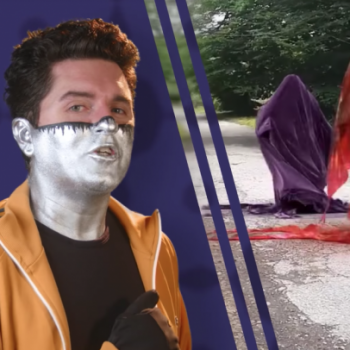