Was Harvard Wrong to Sanction a Christian Student Group That Ousted an LGBT Leader?

Over at the neo-conservative Commentary magazine, Sohrab Ahmari works himself into a lather: 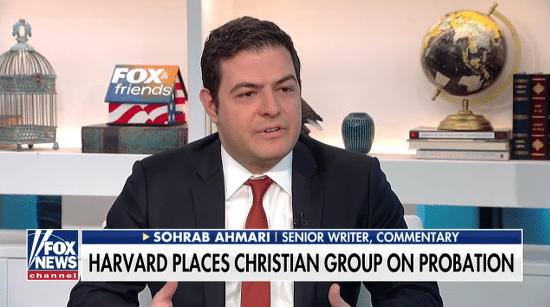 Harvard is now determined to ostracize, censor, and ultimately root out orthodox Christianity from a university that was founded to train ministers in the Puritan tradition. That is the inevitable conclusion to be drawn from the school’s little-noticed decision this year to suspend and defund the largest evangelical fellowship on campus.

Here’s what happened, via the Harvard Crimson. Last fall, the 200-plus-member, decade-old fellowship in question, Harvard College Faith and Action (HCFA), discovered that an “assistant Bible course leader” in its midst is bisexual. Moreover, she’d started a romantic relationship with another woman. HCFA asked the unnamed member to step down, which led Harvard administrators to ultimately place the fellowship on a year-long administrative probation — the first-ever Harvard campus group to be hit with such a sanction. University officials explained that because HCFA has the status of officially “recognized campus student group,” it simply may not discriminate on the basis of sexual orientation.

HCFA responded that actually, the woman hadn’t been asked to resign because of the same-sex relationship, but because she was sexually active. “Our theological view” wrote the leadership duo of HCFA,

…”is [that] celibacy is the only option outside the bounds of marriage.”

The organization claims to apply the same rules to “leaders of all sexual orientations.”

It’s debatable whether that’s true. The Crimson spoke to a former HCFA leader, Veronica Wickline, who was in a relationship with a man during her tenure. Whether they were abstinent and whether anyone in the group knew about the relationship is unclear, but regardless, it didn’t result in Wickline being forced out.

In any case, Harvard — “egged on by a ravenous progressive mob,” charges Ahmari — suspended the group for a year, and the University’s Undergraduate Council, which had previously kicked in funding for HCFA, decided to stop financing ostensible bigotry. Incensed, Ahmari calls that decision “liberal despotism.”

His complaint falls flat. Harvard has every legal and moral right to decline to support organizations that it believes engage in discrimination. Meanwhile, HCFA can continue to exist as a non-recognized campus organization; and considering that the group is heavily “resourced by Christian Union,” an outfit founded to infuse the gospel into Ivy League culture, it seems HCFA is hardly on the verge of dying. Plus, nothing keeps conservative Christians like Ahmari from contributing financially to the group’s future success.

The most curious part of his diatribe is where he bristles about Harvard having lost its way because the university was founded “to train ministers in the Puritan tradition.”

I reckon there isn’t a lot of demand for Puritan clergy these days. In other words, times change — and Massachusetts and Harvard have changed right along with it. Good thing, too. In the 17th century, the state was a de facto theocracy, where blaspheming, committing adultery, and worshipping the wrong God could exact the death penalty. Around the same time time, Harvard, under the leadership of Increase Mather, was busy “replacing pagan classics with books by Christian authors,” to say nothing of the nauseating role that Increase and his son Cotton Mather played in the 1692 hangings of 14 women, five men, and two dogs who were found to be “witches.”

It’s all right, I suppose, for Ahmari to have a boner for those halcyon days; he just shouldn’t expect anyone at present-day Harvard to stroke it. 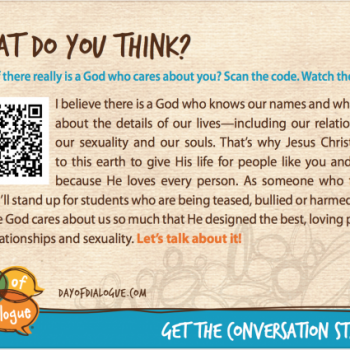 April 10, 2018
Focus on the Family Has Quietly Ended Its Anti-LGBTQ "Day of Dialogue"
Next Post

April 10, 2018 A Bible Has No Place in a Memorial Display at the U.S. Navy Hospital in Okinawa
Browse Our Archives
What Are Your Thoughts?leave a comment