Last week, we pointed out that Ken Ham was having troubling finding employees for the Creation Museum and Ark Encounter. He had full-time, part-time, and seasonal positions available, but not many takers.

That may be because the application requires everyone — from tour guide to plumber — to include their “salvation testimony” (that they’ve been saved by Jesus), their “Creation belief statement” (that evolution as we know it is a lie and the Earth is only a few thousand years old), and “Confirmation of your agreement with the AiG Statement of Faith” (which, among other things, says the “only legitimate marriage” is between opposite sex couples and implies that transgender people don’t really exist).

In short, not only was Answers in Genesis not going to hire Jews, they weren’t even going to hire Christians who strayed from the party line.

It looks like he’s changed his mind about that.

In a Facebook Live video posted this morning, Ham revealed that the rules were no longer as stringent for seasonal employees, often younger people home from school for the summer or winter. You can hear him around the 5:45 mark:

We are a Christian organization, and as a Christian organization, we employ people who are Christians. We actually, for the seasonals, we actually have a more abridged Statement of Faith, the fundamentals of Christianity, not our detailed one for all of our full-time managers and others. So for seasonals, I know there’s a lot of young people who still aren’t necessarily mature in all their thinking in lots of areas, but if they can sign the tenets of the fundamentals of the Christian faith, they can… work here.

Got that, young people? You’re still not real Christians who accept the Bible like Ken Ham does, but he’ll throw you a bone.

Paulogia alerted me to this and said he tried digging up this revised/abridged Statement of Faith to no avail. That was the case for me, too. I opened one of the seasonal job applications and was asked if I subscribed “100%” to the Statement of Faith.

That suggests there’s no actual “abridged” Statement of Faith, but AiG may still consider you for employment if you answer no, and they’ll get into details in person.

What I’m really curious about is what parts of the Statement AiG is willing to let slide. The Creationism aspect? The Jesus stuff? The anti-LGBTQ bits? The part where watching adult movies online is a form of sexual immorality?

Whatever it is, it’s a sign that Ham’s unable to find all the like-minded people he wants to staff his attractions. That’s why he’s opening things up to slightly less fundamentalist Christians (the heathens).

With some limits. Whatever they are. 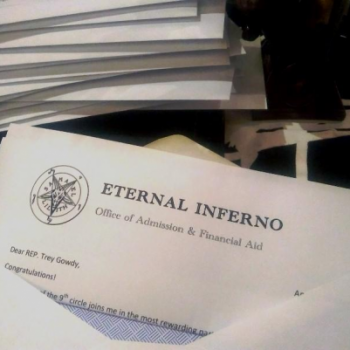 April 10, 2018 David Silverman Has Been Temporarily Suspended from American Atheists
Browse Our Archives
What Are Your Thoughts?leave a comment