A Bible Has No Place in a Memorial Display at the U.S. Navy Hospital in Okinawa April 10, 2018 Hemant Mehta

A Bible Has No Place in a Memorial Display at the U.S. Navy Hospital in Okinawa

If you visit a military base or veterans’ hospital, there’s a good chance you’ll see a “Missing Man” table dedicated to prisoners of war or those missing in action.

Those POW/MIA tables include a number of symbolic artifacts (a white cloth representing pure motives, a yellow ribbon representing hope for their return, a slice of lemon representing their bitter fate, etc). Every now and then, however, we hear about a table that includes a Bible.

While no one has any problem with the memorials themselves, the book’s addition makes you wonder why the government is promoting Christianity. After all, it’s not like casualties of war always believe in God. In a way, putting a Bible on that table perpetuates the false notion that there are no atheists in foxholes.

In the past, when groups like the Military Religious Freedom Foundation have pointed out the problems with this, the Bible has been removed (though not without controversy).

But the latest incarnation of this Christian table is getting a lot of headlines. It involves a memorial at the U.S. Naval Hospital in Okinawa, Japan, the Navy’s largest overseas hospital: 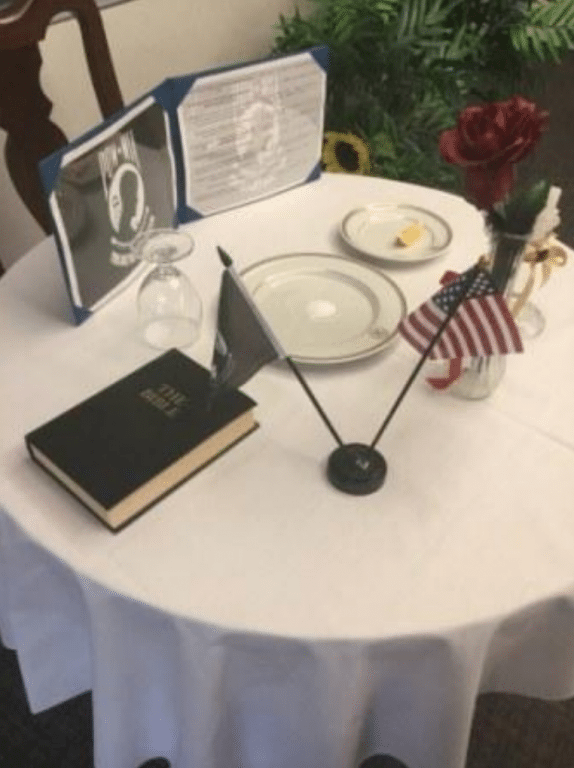 According to a letter from MRFF founder and president Mikey Weinstein (on behalf of more than two dozen mostly Christian clients) to Rear Admiral Paul D. Pearigen, this Bible has to go:

The issue here is that by including a Bible as part of the POW/MIA Display in the public Galley, it signifies two things. First, that this is an official, command-endorsed Display. Second, that the command is endorsing Christianity (versus other major religions or non-religious beliefs) as expressed in the Christian Bible to the total exclusion of any other belief systems or non-belief traditions.

Even more than the suggestion is the direct message about what the Bible represents, as explained in a placard next to the table:

The Bible represents the strength gained through faith to sustain those lost from our country, founded one nation under God.

That runs afoul of the First Amendment and our actual history. We’re not and never have been a “nation under god,” no matter the demographics. And, again, people lost to war are not universally Christian.

Weinstein says he spoke to a Judge Advocate General (JAG) assigned to that hospital but couldn’t get a clear answer as to when the issue would be discussed internally, which is why he filed a formal complaint. MRFF isn’t asking for money. They just request that the Bible be removed, the placard modified, and an investigation conducted as to how this display got there.

The Navy said on Friday that they would be investigating the matter.

Weinstein told me last night that, if the display is not modified, they will file an Inspector General Complaint (which would maintain the clients’ anonymity). Why that route? It would allow everyone involved to avoid the “three R’s”: Reprisal, retribution, and revenge.

And while church/state separation advocates are likely aware of this, Weinstein added that “Pulling that Bible is not Christian victimization. It’s Christian equalization.”

In other words, his request isn’t about persecution. It’s about neutrality. 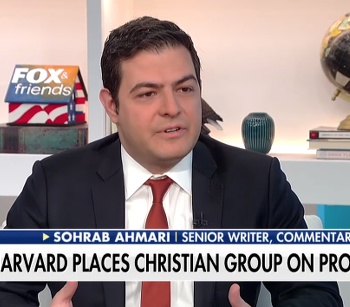 April 10, 2018
Was Harvard Wrong to Sanction a Christian Student Group That Ousted an LGBT Leader?
Next Post 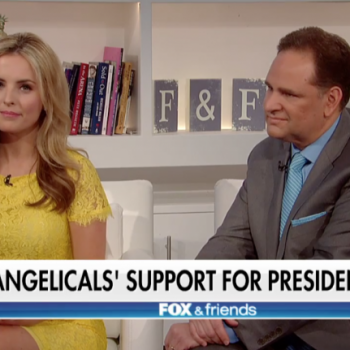 April 10, 2018 Christian Host: Evangelicals Back Trump Because His Oval Office is Scandal-Free
Browse Our Archives
What Are Your Thoughts?leave a comment