Televangelist: With God’s Help, I Brought a Dead Ant Back to Life April 4, 2018 Hemant Mehta

Televangelist: With God’s Help, I Brought a Dead Ant Back to Life

He once claimed to stop a tsunami from coming onto a Hawaiian island. He also blamed AIDS on “unnatural sex.” He also loves to heal people, like when he supposedly cured a man with cancer in his tongue just by reciting some words on television. (No before/after medical records of the man were ever released, of course.)

For his latest trick, Amedia said he resurrected an ant. A literal ant. He made the claim on Friday’s episode of TCT Today (TCT stands for Tri-State Christian Television):

“This was the most incredible one,” Amedia said as he recounted how during a recent trip to Israel, he was bitten on the leg by an ant while praying and instinctively swatted it, before crushing it into pieces with his thumb.

“All of a sudden, the Holy Spirit speaks to me so clearly. It was as clear as I have ever heard,” he said. “It was the voice of the Father. The Father calls me son, and the Father said, ‘Son, look at the ant’ … And then the Lord said to me, ‘Son, I hear the cry of an ant.’”

“I began to weep inside of me,” Amedia continued. “And then the Lord said, ‘Son, take your finger and touch the ant.’”

Amedia claims that when he did as instructed, “the power of God shot out … and the ant, it came alive and the pieces all were together and it jumped up on my finger, came up very slowly my palm, and stopped right there as if it was looking right at me.”

As you’d expect, there’s no way to verify this story… which may be why Amedia told it. Unlike other evangelicals who claim to bring humans back to life, Amedia knows no one’s going to question him about this. It’s not like we can look for the ant’s medical records or talk to his family.

Amedia, of course, never points out the possibility that he just didn’t kill the ant the first time around. It never even occurs to him. Sure, some people are dying of cancer, but this ant needed a second chance at life.

Sounds like solid proof to me. To paraphrase one YouTuber, we may as well rename it Christiantity.

April 3, 2018
Please Support the Work I Do Through This Site
Next Post 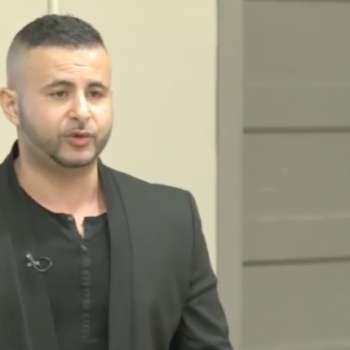 April 4, 2018 Welcome to Khaled Beydoun's America, Awash In (He Claims) Rampant Islamophobia
"Thank you for this information. It sounds like it has been a very complicated controversy. ..."
Richard Wade Montana Man Who Tore Down Ten ..."
"I enjoy that they found a little girl who resembles the original Mikey."
LenKoz Christian Hate-Pastor Steven Anderson Is Still ..."
"Most impressive."
LenKoz Christian Hate-Pastor Steven Anderson Is Still ..."
"We've also got the other side: the 'woke' ones at the peak of 'mount stupid' ..."
Tommy Canadian Official: COVID-Defying Churches Should Lose ..."
Browse Our Archives
What Are Your Thoughts?leave a comment