To No One’s Surprise, the Museum of the Bible is Full of Misleading Exhibits March 29, 2018 Hemant Mehta

To No One’s Surprise, the Museum of the Bible is Full of Misleading Exhibits

Even though the new Museum of the Bible in Washington, D.C. claims to be “nonsectarian,” it promotes a very clear Protestant view of the Bible. The writer Katherine Stewart called it a “safe space for Christian nationalists.”

But the people running the place have always insisted this is a museum, not a church. They may hope people come to Christ as a result of their visit, but the goal is to showcase the history of the Bible, good and bad.

You would think, then, that the exhibits in the place would at least be accurate from a historical point of view.

But the Freedom From Religion Foundation says that’s not the case at all. In a letter sent by the group to the museum’s Executive Director Dr. Tony Zeiss today, they point out a number of major inaccuracies in the exhibits.

Like on the second floor, where the museum showcases the “Impact of the Bible,” there’s a ride called “Washington Revelations” where you’re given a “tour” of D.C., “stopping by” several landmarks that have been influenced by the Bible or include biblical references.

The problem, FFRF says, is that some of the quotations mentioned in the ride “do not come from or were not influenced by the bible, while others do not demonstrate the biblical influence the museum claims.”

One example is how the ride says President Lincoln‘s Gettysburg Address was inspired by the Bible. That has no basis in fact. It appears that the museum is citing one source, which FFRF says is dubious at best, and even then it’s not very convincing. Another example is found when the ride “stops” at Union Station which includes a biblical inscription (John 8:32). FFRF points out that when the station was built, the “design, construction, and financing, including of the bible verse, were all private.” The museum, however, treats it with far more reverence than it deserves, sending the wrong message to casual visitors. The question is whether that’s accidental or on purpose.

Another problem in the museum appears in the section honoring suffragist Elizabeth Cady Stanton, author of The Woman’s Bible. FFRF notes that behind her portrait is a Bible verse, Psalms 68:11, which says “The Lord giveth the Word; The women that publish the Tidings are a Mighty Host.” That’s highly misleading, they say:

Placing this bible verse next to Stanton is clearly intended to create the impression that 1) Stanton was inspired by the bible to work for women’s rights, and 2) the bible and this specific verse trumpet or endorse women’s rights. These impressions could not be more false… Stanton would have been deeply offended at having this irrelevant and war-mongering bible verse employed as if it were her motto!

Another problem? The original painting of George Washington called Prayer at Valley Forge, currently on loan to the Museum. 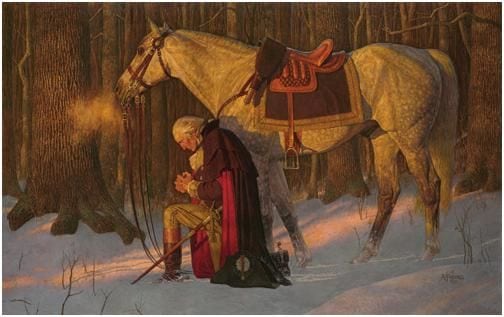 FFRF notes that this “prayer” never actually happened, according to historians. The legend behind it comes from the same source that said Washington chopped down a cherry tree — another lie. The museum staff seems to know this since the placard next to the painting says it “portrays an imagined moment of prayer,” but by displaying the painting prominently, FFRF says, “the museum creates the contrary impression.” Because it’s a fake setup, it certainly doesn’t promote the Bible or show its influence.

There was one more problem mentioned in FFRF’s letter: A video in which actors read quotations by John Adams and Thomas Jefferson. In one case, Jefferson is quoted saying people should read the Bible just as they read famous Roman writers (“Read the bible then, as you would read Livy or Tacitus…”), but the Museum doesn’t offer the context of that quotation.

In fact, right before the part quoted by the Museum, Jefferson said:

Question with boldness even the existence of a god; because, if there be one, he must more approve of the homage of reason, than that of blindfolded fear. You will naturally examine first the religion of your own country.

I haven’t mentioned everything FFRF included in its letter, but I hope the gist is clear. You would think a museum whose administrators claim to value accuracy would take these problems seriously. No one’s saying the Bible wasn’t influential. So why do these organizers have to bend or make up the facts in order to promote their mission?

They have a choice: They can make the changes and show that they care about accuracy, or they can go the way of the Creation Museum and just promote mythology hoping no one will notice the difference since the word “Museum” is right in the title. 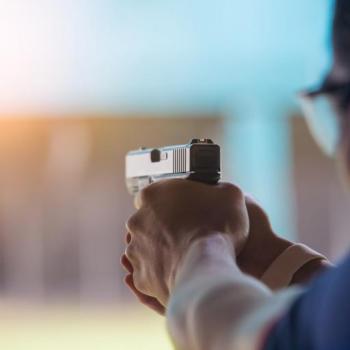 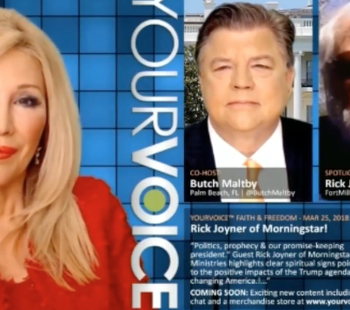 March 29, 2018 Pastor: A Christian Revival is Underway Because Trump Has "Sincere Fear" of God
"NI (at least the unionist half) is the Alabama of the UK. If politicians were ..."
Mike Meredith The New Leader of a Major ..."
"Are you sure the modern alphabet and numerical systems were used 2,000 years ago?"
BlueSurgeon “Prophet” Who Promised Trump Victory Says Only ..."
"I'm not sure it's that brave given the kind of shít off a shovel they ..."
Mike Meredith The White House Faith Office Met ..."
"True.On the other hand, perhaps the schadenfreude from watching the aneurysms this will cause amongst ..."
Mike Meredith The White House Faith Office Met ..."
Browse Our Archives
What Are Your Thoughts?leave a comment