In Survey of Which Groups Need More TV Representation, Atheists Are Dead Last

The Roseanne reboot is set to premiere tonight on ABC, and one of the more unusual aspects about the show is that the main character will be a supporter of Donald Trump. As far as sitcoms which take place in the modern day go, that’s not typical. Even fictional characters on TV seem to be anti-Trump these days.

But it raises some interesting questions: What perspectives are represented on television? Which perspectives do you want to see reflected on TV? Are there views you don’t want to see at all?

The polling organization Morning Consult has released a poll concerning those questions, and on matters of religion, I have some bad news.

Nobody wants to see more atheists on television.

Among all adults surveyed, there was less of a desire to see more atheists represented on TV than Muslims, White America, and rich people. 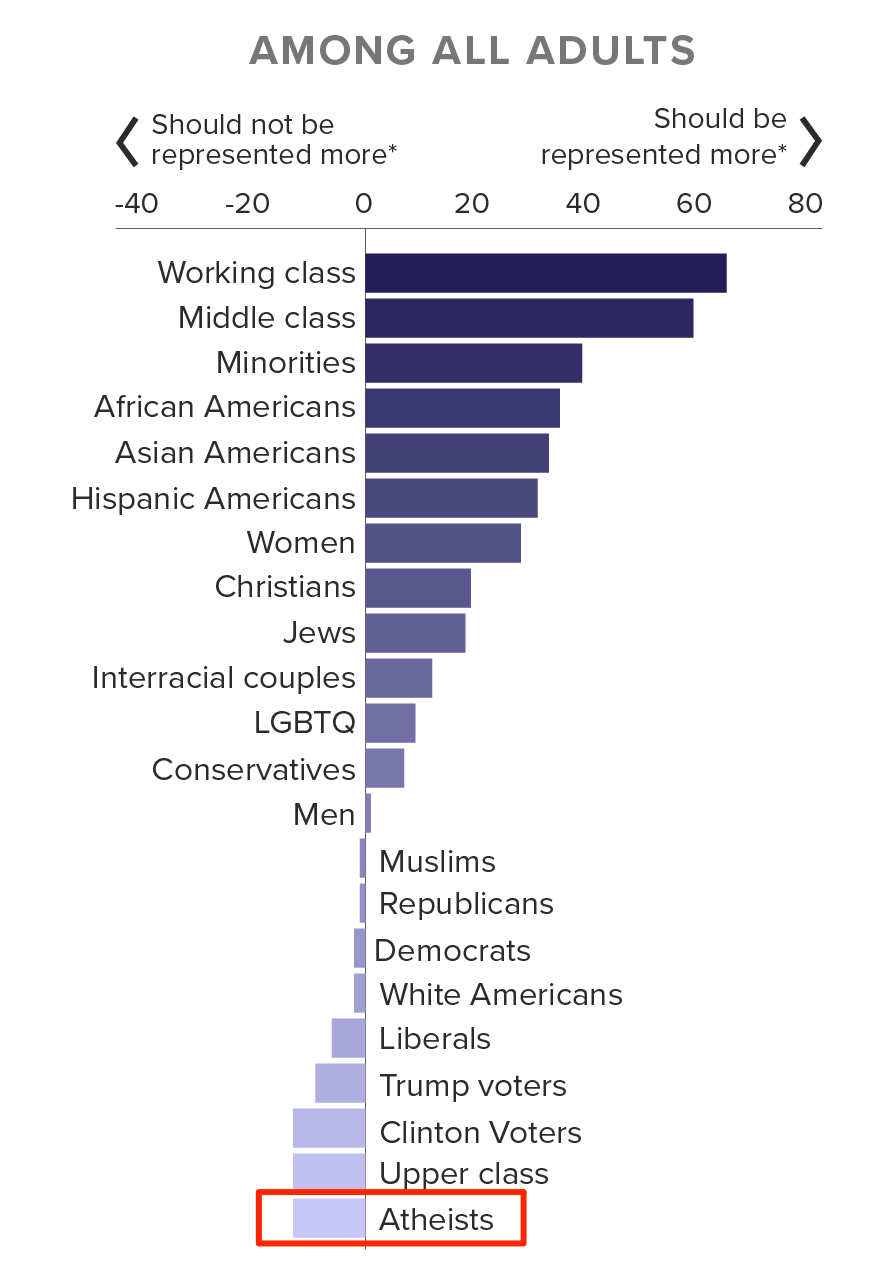 It’s not all that surprising that Republicans had no desire to see more atheist representation on television, but even for Democrats, among the groups they wished had more representation, atheists were the lowest of the bunch. (Click the image to embiggen it.) 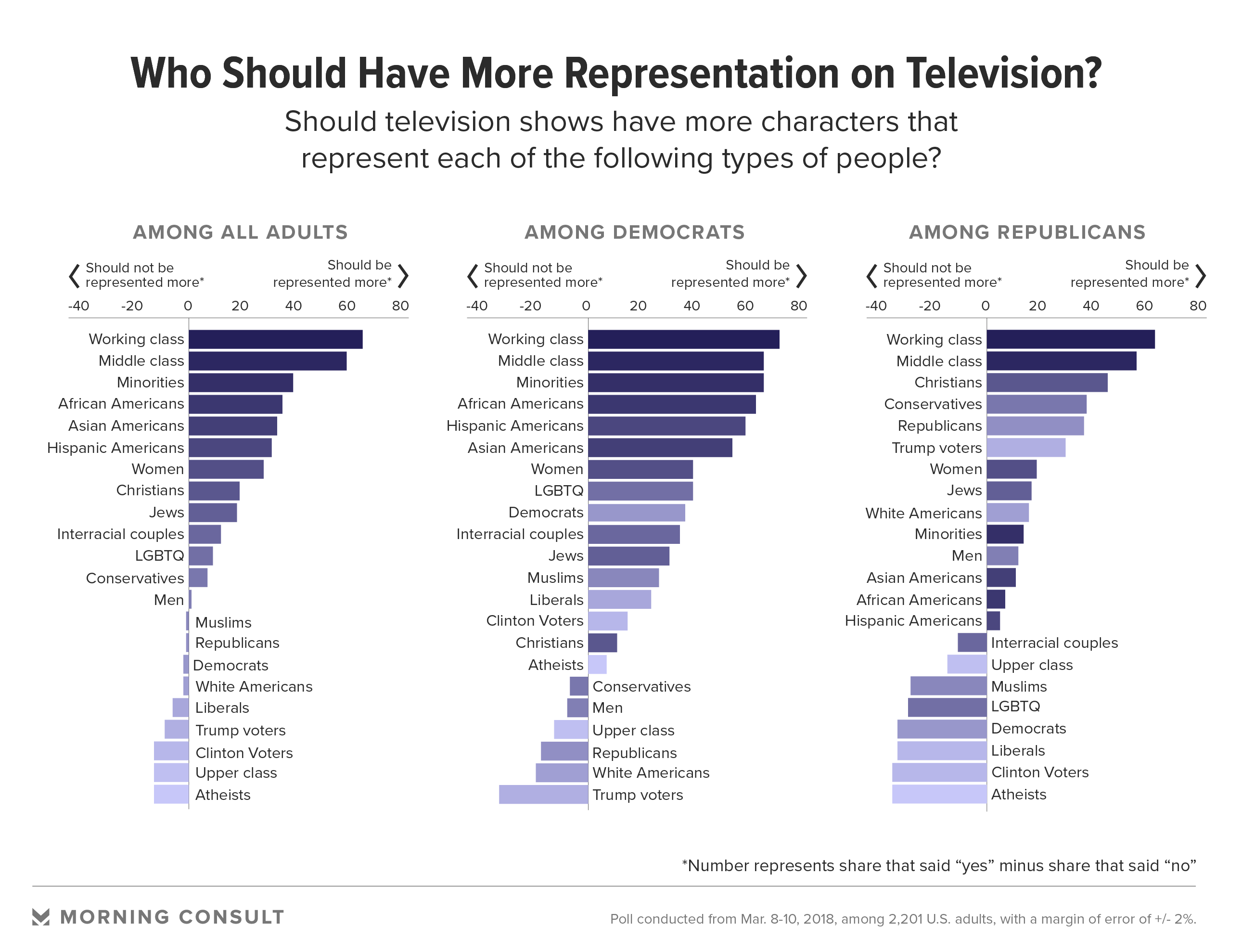 It’s not that atheists on TV don’t exist. Just to name a few: Sheldon Cooper (The Big Bang Theory), Brian Griffin (Family Guy), Piper Chapman (Orange Is the New Black), and Rick (Rick and Morty) are all open about their religious doubts.

To put it another way, it’s not weird to see atheists on TV because they’re on some fairly popular shows, yet very few Americans think we need to hear that perspective more often than we already do.

Why is that? I would guess because of the stigma against atheists rather than people thinking there are already far too many godless voices as is. We don’t do well on popularity polls. And unlike Muslims, who also don’t fare well in those types of surveys, there’s a (misguided) perception that atheists are far greater in number than there actually are, so we don’t need the help. (Conservatives often refer to the “Godless” Left even though Democrats are almost all religious.)

I think a lot of people also assume shows that don’t explicitly promote Christianity, or which poke fun at religion, are automatically endorsing atheism. That’s not the case at all. Stephen Colbert‘s late night show (which obviously isn’t fictional) pokes fun at religious hypocrisy all the time, but anyone who watches it knows Colbert himself is Catholic and celebrates his faith every chance he gets. How many fictional shows are considered “pro-atheist” in the same way?

Incidentally, there are plenty of religious characters on television, yet the survey found that Democrats and Republicans both want to see a greater representation of Christianity than they do now. But maybe that makes sense. It’s not like they’re seeing likable Christian characters on any of the news channels covering the White House. 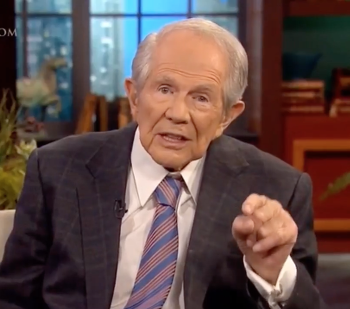 March 27, 2018
Pat Robertson Praised the Parkland Students for "Getting Out and Protesting"
Next Post 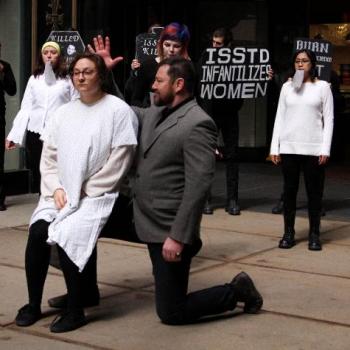 March 27, 2018 Satanists Protested a Therapist Conference Pushing "Satanic Panic" Pseudoscience
Browse Our Archives
What Are Your Thoughts?leave a comment