With a perfectly straight face, Pastor Robert Jeffress, an evangelical adviser to Donald Trump, dismissed the Stormy Daniels scandal, showing once again how white evangelicals will let anything Trump does slide as long as he continues advancing their agenda.

To paraphrase: Sure, these sex scandals are wrong. Sure, we would blow it completely out of proportion if Barack Obama were guilty of the same thing. But this is Donald Trump, so hypocritical evangelicals will continue looking the other way. That’s what Jesus taught us to do.

“Evangelicals knew they weren’t voting for an altar boy when they voted for Donald Trump,” he said. “We supported him for his policies and his strong leadership.”

In fact, when it comes to those behaviors, he suggested there’s pretty much nothing Trump can do to alienate him as long as he delivers on those policies.

Jeffress is admitting what Trump’s critics — and critics of religion — have been saying ever since the election: The Christians backing Trump claim to have the moral high ground, and when confronted with evidence that Trump has violated those rules, they conveniently ignore it. Because morals don’t matter when it’s being traded for access and power.

This is what white evangelicals do every time one of their own is embroiled in a sex scandal. It’s dismissed, ignored, written off as “sin,” or treated as a story of persecution.

Jeffress says Trump is delivering on “those policies,” but realize that basically involves pissing on the Constitution and lowering the quality of life for women and minority groups, while eroding the separation of church and state.

Our country is worse off today because white evangelicals are more concerned about their self interests than doing what’s best for the people they claim to want to save. Every day brings another reminder of just how low evangelicals will sink in order to defend an awful human being who pays them lip service.

With chronic lying being a way of life for these people, I’m amazed that Jeffress hasn’t claimed Trump didn’t really sleep with Stormy Daniels and that he actually met with her in order to lead her to Jesus. But give it time. It’ll happen one day.

March 9, 2018
“The View” Host Joy Behar Apologized to Mike Pence (But She Shouldn’t Have)
Next Post 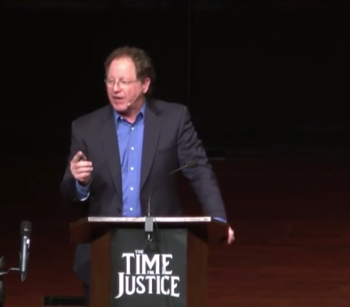