It’s been almost two weeks since BuzzFeed first published an article detailing sexual misconduct allegations against cosmologist and atheist Lawrence Krauss. So far, Krauss hasn’t issued any public response other than to deny all the claims.

However, a number of groups, universities, and event organizers have backed away from Krauss, some saying they’re in the middle of their own investigations. (I posted earlier that the American Humanist Association expressed support for the women, however they haven’t made any decisions regarding future interactions with Krauss.)

1) Arizona State University, where Krauss is a tenured professor, has put him on paid leave — and banned him from campus — during their own investigation.

“In an effort to avoid further disruption to the normal course of business as the university continues to gather facts about the allegations, Krauss has been placed on paid leave and is prohibited from being on campus for the duration of the review,” the ASU statement said.

ASU officials also said the BuzzFeed story was news to them since they had no knowledge of any wrongdoing:

“What we know is that we have no reports, not a single report, of misconduct from any person associated with ASU made to the University. None,” ASU President Michael Crow said in a March 2 meeting with The State Press. “What we have is a BuzzFeed article. … So now we have launched a full scale investigation of Professor Krauss.”

The original BuzzFeed story cited several women at ASU who said Krauss’ “workplace behavior was sometimes offensive,” however those women also said they didn’t make any formal complaints to the school.

2) The Center for Inquiry (which recently merged with the Richard Dawkins Foundation) announced they would “suspend our association with him pending further information.” Krauss had been on CFI’s board of directors for several years.

Official Statement: The Center for Inquiry is committed to a policy (https://t.co/cvF2JVkZCD) of zero-tolerance for sexual harassment. Serious allegations have been raised regarding Lawrence Krauss, and we suspend our association with him pending further information.

Official Statement: The Center for Inquiry is committed to a policy (https://t.co/4OdwFGKafJ) of zero-tolerance for sexual harassment. Serious allegations have been raised regarding Lawrence Krauss, and we suspend our association with him pending further information.

I should point out that Dawkins himself has a number of joint events with Krauss scheduled for this spring (more on that later). So far, Dawkins hasn’t personally said anything about the situation. It’s unclear if his foundation’s statement about suspending association with Krauss applies to Dawkins as well.

3) Krauss has resigned as chair of the Bulletin of the Atomic Scientists, the group responsible for adjusting the famous “Doomsday Clock.” He denied the allegations again and said he didn’t want to distract from the group’s work.

Amid the reactions immediately following the recent BuzzFeed article about me, I expect that many Bulletin subscribers and fans were upset. I want to assure them, and you, that the claims about me in the story are incorrect. As you know, I have denied the story’s allegations. BuzzFeed was provided with abundant counter-evidence that was ignored or distorted in their story.

… I appreciate the kind words you relayed from my colleagues on the board and understand from our discussions that the board feels that as a result of the various reactions to the article my presence on the Board of Sponsors at this time distracts from the ability of the Bulletin to effectively carry out that work. I therefore resign from the Board of Sponsors effective immediately.

The group said in response that Krauss “has been a valued member of the Board, and has greatly contributed to the Bulletin’s mission during this perilous moment in global affairs.”

4) The American Physical Society was going to have Krauss speak at their annual meeting in April, but that invitation has been withdrawn. They said in a statement:

The leadership of the American Physical Society has withdrawn its invitation to Prof. Lawrence Krauss to give a talk and to participate in its 2018 April Meeting… The APS deplores harassment in all its forms and remains committed to ensuring a respectful and safe environment at its meetings.

5) An event scheduled to take place next week at MIT, Krauss’ alma mater, will no longer be happening. According to BuzzFeed, the MIT Alumni Association pulled the plug on the event but no official reason was offered.

6) One group hasn’t distanced itself from Krauss. Think Inc., an Australian group sponsoring a series of talks with Krauss and Dawkins this May, hasn’t said anything about whether its plans are moving forward.

The Australian took note of that, quoting Richard Easther, a cosmologist at the University of Auckland, who expressed his disappointment that the events are still on the calendar.

“I am hugely disappointed Think Inc have not fronted on this. They talk about how their goal is to ‘challenge intellectual comfort’. But rather than just selling tickets to celebrity atheists, they could be talking about their own commitment to addressing systemic harassment in science. Tackling this openly could bring about real and positive change, so they have completely missed the boat here.”

“So they are selling VIP meet-and-greet opportunities with a ­celebrity who is rumoured to have misbehaved toward people he meets at events — that really does raise questions that go beyond Think Inc just turning a blind eye to the rumours, but whether they are actively running a risk of ­enabling poor behaviour toward their punters.”

That said, a New Zealand-based group called Loop that was sponsoring one of the Think Inc. events has pulled its sponsorship. (Update: Think Inc. now says Krauss will not join Dawkins on the tour. It’s unclear who initiated that removal or if Loop will come back as a sponsor.)

Who knows how many other dominoes will fall before this is over? 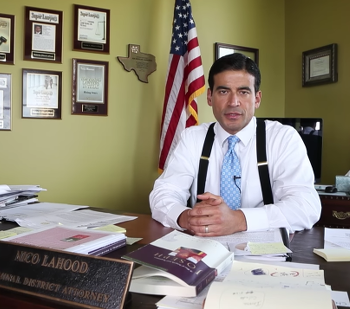 March 6, 2018
TX District Attorney Who Said "Vaccines Can and Do Cause Autism" Loses Primary
Next Post 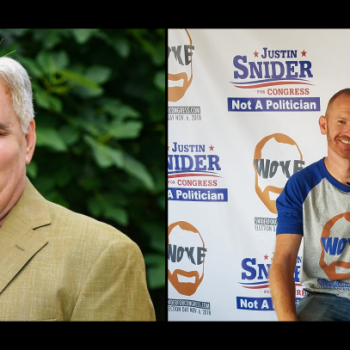 March 7, 2018 Two Openly Non-Religious Candidates Lost Their Congressional Primaries in TX
Browse Our Archives
What Are Your Thoughts?leave a comment