TX District Attorney Who Said “Vaccines Can and Do Cause Autism” Loses Primary March 6, 2018 Hemant Mehta

2016 saw the release of an anti-vaccination propaganda film called Vaxxed: From Cover-Up to Catastrophe. The film was removed from the Tribeca Film Festival lineup after strong backlash.

Still, one of the talking heads promoting the film was Nico LaHood, the Bexar County District Attorney (in San Antonio, Texas).

In the first few seconds of that video, he makes a dangerous and completely unjustified claim:

I’m Nico LaHood. I’m the criminal district attorney in San Antonio, Texas. I’m here to tell you vaccines can and do cause autism.

He and his wife Davida justify that statement by telling the story about how their child “changed” after receiving a vaccination, leading them to believe vaccines were the culprit. Scientists, of course, have looked at that supposed link for decades and found nothing to link the two. The studies which have suggested that link have later been shown to have fundamental errors in methodology or analysis.

What made their remarks particularly awful was that LaHood said he was simply following the evidence:

… what I do is I follow evidence. I’m an empirical data guy. If you show me evidence… give me objective evidence, I’m gonna do what’s right with that information because I gotta present it to a jury and persuade them to go my way because I believe that I’m doing what’s right.

If the evidence guy went in the absolutely wrong direction on vaccines, what did that say about his work as a prosecutor…? This was essentially a district attorney going on camera and telling the world he believes a conspiracy theory because it just felt right.

I bring all this up because there was some good news in tonight’s primary elections in Texas. LaHood, a Democrat, lost his primary to challenger Joe Gonzales. It wasn’t even close, with voters giving Gonzales a roughly 60-40 edge.

LaHood, who seems to have a habit of casting blame in all the wrong places, attributed his loss to outside money from activist George Soros.

“In my opinion the voters were unfairly influenced by $1 million worth of lies. There’s no other way to say it,” LaHood told supporters at his post-election gathering at the San Antonio Professional Firefighters Association Banquet Hall.

“This, unfortunately, is not the worst thing I’ve been through in my life,” he said. “I’m at peace.”

Uh-huh. Soros did it. Hell, at this point, LaHood should’ve just blamed vaccines. It would make as much sense as his autism claim.

LaHood’s loss is a victory for other reasons, too. He supported the death penalty. He lied about how Muslims “tried to set up a Sharia court” near Dallas. He was also a prosecutor with allegations of misconduct against him. He was really a Republican who pretended to be a Democrat.

Good riddance to him. The people in Bexar County will have a far better Democrat on the ballot this November. 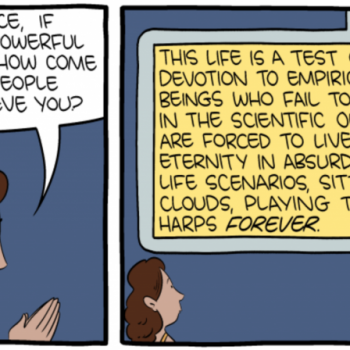 March 6, 2018
I Finally Understand Why So Many People Reject Science
Next Post