The Church Ceremony Blessing People With Their AR-15s Was Weird As Hell March 1, 2018 Hemant Mehta

We learned last week that a Pennsylvania church, in response to the shooting in Parkland, Florida, would be blessing their members’ semi-automatic weapons. Because there’s nothing God loves more than His creations blasting the hell out of His other creations.

It was a bizarre story for a few reasons. We learned that a nearby elementary school was going to cancel classes that day, though they later said the concern wasn’t the threat of gunfire but the number of strangers in the vicinity. This was also not your typical Christian church. Sanctuary Church — officially the World Peace and Unification Sanctuary — was an offshoot of the controversial Unification Church founded by Sun Myung Moon.

But still. When you rip away the familiarity we have with certain religions, everyone’s delusions look very much alike.

All that said, I wasn’t expecting the blessing ceremony, which took place yesterday, to look anything like this.

An attendant checked each weapon at the door to make sure it was unloaded and secured with a zip tie, and the elaborate commitment ceremony went off without a hitch.

Tim Elder, Unification Sanctuary’s director of world missions, told worshippers the ceremony was meant to be a blessing of couples, not “inanimate objects,” calling the AR-15 a “religious accoutrement.”

Riiiiight. It’s like an accessory. Because when couples are blessed in church, there’s that saying, “Something old, something new, something borrowed, something I-blew-your-head-off.” Let’s hope no one drank too much of the holy wine.

I still don’t know what this blessing will accomplish. The church hasn’t explained if the guns will now shoot better, if the church members will have better aim, if the weapons will send victims directly to Heaven, etc. It’s just another batshit crazy religious ceremony in which weapons were glorified and gullible believers thought nothing of it. 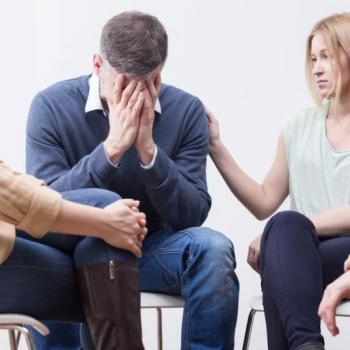 March 1, 2018 North Carolina Wants a Statue of Evangelist Billy Graham in the U.S. Capitol
Browse Our Archives
What Are Your Thoughts?leave a comment