One of the many Republicans retiring before the 2018 midterms is Rep. Joe Barton from Texas. He may be best known among atheists for claiming the biblical story of Noah’s Flood is proof that humans have no impact on climate change. The man of devout Christian faith decided not to seek re-election after he was caught sexting with another woman while married to his second wife and his nude photos turned up on Twitter.

So when it comes to replacing Barton, you can bet Republicans are pushing each other out of the way to show they’re more pious than the others. (And isn’t that really what government is all about?)

Of the 11 Republicans running in the primary, the man who “leads the pack” according to one news report, is Ron Wright, a former staffer for Barton as well as the Tarrant County Tax Assessor/Collector.

His claim to fame is collecting everyone’s taxes using envelopes on which he stamped the words “In God We Trust.” Because God and money always go together. 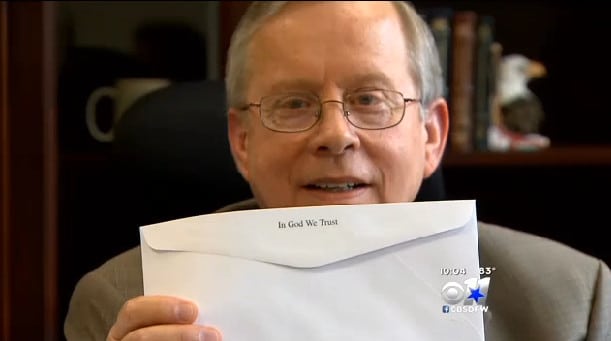 In terms of name recognition and endorsements, Ron Wright arguably leads the pack. He’s also raised the most among GOP contenders: more than $105,000 according to the latest filings. A former staffer to retiring Rep. Joe Barton, Wright was an Arlington City Council member before becoming the Tarrant County Tax Assessor-Collector.

“I put ‘In God We Trust’ on tax statements and envelopes in the tax office because I believe it’s the national motto and should go on all government documents. And I did it knowing I probably be sued,” he told the crowd.

The Texas GOP is certainly hoping Wright wins the primary. It’d be replacing one ignorant theocrat with another. But if Barton’s story tells us anything, it’s that the people who broadcast their faith the loudest are often the ones hiding the most secrets.

(Image via CBS 11. Thanks to Brian for the link) 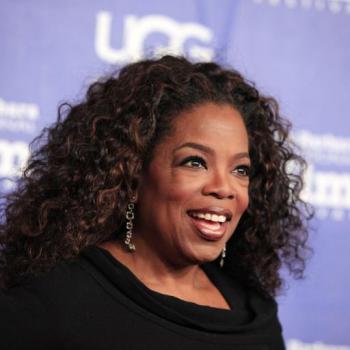