Has Evangelist Benny Hinn Renounced the Prosperity Gospel? Not a Chance.

One of the last people I’d ever expect to hear criticizing the “prosperity gospel” — the idea that God wants you to be rich — is Benny Hinn. He’s the televangelist known for touching people on the forehead until they fall backwards from the force of God, and he’s made a hell of a lot of money convincing gullible Christians that he a stop on their path to salvation.

Yet Hinn said that some people take the Christian idea of prosperity too far during a conversation posted on Facebook this week.

You can hear it starting around the 9:45 mark in the video below:

We get attacked for preaching prosperity, well, it’s in the Bible, but I think some have gone to the extreme with it sadly, and it’s not God’s word what is taught and I think I’m as guilty as others. Sometimes you go a little farther than you really need to go and then God brings you back to normality and reality…

So what is prosperity? No lack. And I’ve said this before.

Did Elijah the prophet have a car? No. Did not even have a bicycle. He had no lack… Did Jesus drive a car? Or live in a mansion? No. He had no lack. How about the apostles? No lack. None lacked among them. Today, the idea is abundance and palatial homes and cars and bank accounts… The focus is wrong… It’s so wrong.

I guess we’re supposed to assume he’s poorer now because the vertical video implies he can’t afford a real camera. (He should chat with Joshua Feuerstein about that.)

Hinn also insisted he flies commercial rather than on private jets. (First class or coach, he didn’t say.)

If he’s telling the truth, it would stand in stark contrast to what his own nephew said in a Christianity Today article last year, when he recalled flying with Hinn in a Gulfstream Jet while “enjoying every luxury money could buy.” (All this happened 15 years ago.)

My father pastored a small church in Vancouver, British Columbia. During my teenage years, he would travel nearly twice a month with my uncle, Benny Hinn. Prosperity theology paid amazingly well. We lived in a 10,000-square-foot mansion guarded by a private gate, drove two Mercedes Benz vehicles, vacationed in exotic destinations, and shopped at the most expensive stores. On top of that, we bought a $2 million ocean-view home in Dana Point, California, where another Benz joined the fleet. We were abundantly blessed.

So when did Benny Hinn go from luxury to modest means? He didn’t say. And it’d be wrong to assume he’s done that. Notice that he only speaks in generalities. He’s a lot like Donald Trump, who says he wants to help the poor, and that he’s not taking a salary, and that he’ll fight for the rights of the marginalized… even though his actions all point in the opposite direction.

Benny Hinn might suggest that he shouldn’t be living luxuriously, but when was the last time you saw a wealthy Christian voluntarily becoming poor because that’s how Jesus & Friends lived?

Hinn recalled an online commenter who said the preacher was worth $40 million. He dismissed that claim.

Oh, how I wish! I would give it all to the Kingdom before God Almighty.

Uh-huh. Sure he would. His ministry is a church, so he’s under no obligation to release his tax returns, but the glimpses of his life we’ve seen show no signs of modesty.

He might say that video is old, and he’s totally not that guy anymore, but good luck finding accurate pictures of his new modest lifestyle.

That’s why Hinn doesn’t deserve any credit for denouncing the prosperity gospel. Not yet. We need to see some receipts first.

His entire life has been dedicated to spreading a lie. Not just the typical biblical lie all pastors tell, but the idea that God can heal everyone’s wounds and that “seed money” to his ministry will somehow turn into wealth for the donors.

Has Hinn suddenly seen the light? None of his actions have suggested any move away from the lifestyle of a wealthy pastor getting rich off of his followers. 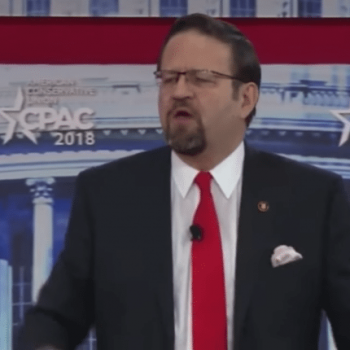