It’s almost a joke at this point to hear anybody complaining about how awful a President Hillary Clinton might have been, given the never-ending chaos and ineptitude that defines the Trump administration.

Yet, during an interview with Rick Wiles of “TruNews,” Christian author Paul McGuire claimed that believers are very lucky to have Trump in charge. The alternative, he said, would have been incredible levels of religious persecution.

“I’ve read many accounts which suggest that she is a practicing witch, part of a witches coven at the very highest levels,” McGuire said. “I think she has a demonic hatred in her — her statement about the ‘deplorables’ revealed what was in her heart.”

“I believe that if Hillary Clinton had become president of the United States,” he asserted, “like Jezebel, she would have persecuted, arrested, fined, imprisoned and perhaps killed America’s pastors, she would have shut down the preaching of the gospel and the gates of hell would have broken loose on our nation.”

I’m still amazed at how a comment correctly calling large groups of Trump supporters “deplorable” has lived on in the conservative echo chamber when their words and actions, every single day, prove just how perceptive she was.

By the way, Clinton is a Christian who taught Sunday School. Her running mate was a former missionary. The sorts of things McGuire is saying are the same things conservative Christians said about Barack Obama when he took office — and they obviously never happened.

Why would they? Democrats actually care about upholding the law. Unlike today’s Republicans, they don’t just pick and choose which ones apply to them. 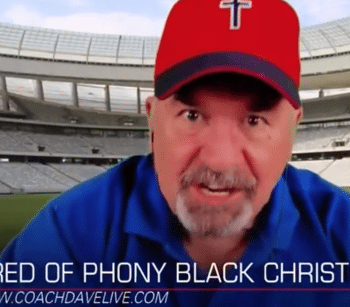 February 15, 2018 Christian Activist: I’m Sick of “Phony Black Christians” Who Voted for Obama
Browse Our Archives
What Are Your Thoughts?leave a comment