Christian Ministry: Mental Illness Can Be Avoided If You Have Faith in God February 8, 2018 Beth Stoneburner

Christian Ministry: Mental Illness Can Be Avoided If You Have Faith in God 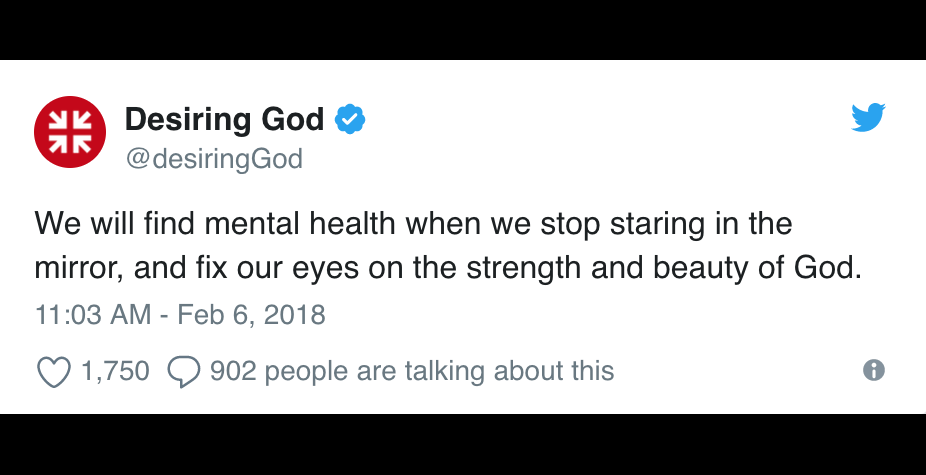 Patheos blogger Warren Throckmorton laid out the problems inherent in this statement:

Tweets like the one from Desiring God reinforce the misconception that mental health conditions can be overcome by willpower or positive thinking. Those who struggle have to deal with their illness and the stigma from those in the church who spiritualize their illness…evangelicals have not grappled with the reality of brain as body. Consciousness arises from brain and does not reside in a spiritual substance independent of body. Like it or not, if you don’t deal with this, I don’t think you understand who we are as human beings. Knock out certain parts of our brain and we become different people. I don’t think I have ever heard a sermon or Sunday school series on the religious significance of our brains.

It should go without saying that this “advice” is incredibly dangerous. Not only does the organization risk alienating Christians who suffer from depression — yes, they do exist — it may encourage them to avoid seeking professional help, which can put their lives at risk. Mental health is just as important and valid as physical health.

There were no shortage of Christians who criticized the group for their callous statement:

I have PTSD directly related to having over 250 surgeries. I love Jesus and He is the first one to tell me it’s ok to not be ok…that’s why I need Him. Such an insult to those who suffer silently in pews across America.

That’s weird, because I live with sometimes-crippling depression, which, at times, leaves me wishing for death, and I rarely stare into a mirror. Yet somehow all the strength and beauty of God hasn’t changed my brain chemistry.

I delight in the beauty of God, and I battle depression. The simple implication in this tweet that good mental health is somehow a matter of spiritual rigor is a damaging and dangerous thing to say without any context. Please rethink this approach.

this is absolutely horrible advice. I'm alive today due to a mental health intervention 18 years ago and a pharmaceutical cocktail today. God is a help in recovery but you do wrong to imply medicine and therapy don't help immensely.

We will find mental health when we stop drowning in the guilt imposed on us by those who blame mental illness on a lack of faith, and utilize all the tools God has given us for wholeness, including good therapists and medication.

I have to wonder if Desiring God would tweet something similar about Christians with diabetes or cancer. Or are those the result of a lack of faith, too?

Desiring God has since tweeted an update saying people were taking their comments out of context and they were simply referring to peace of mind. They linked to the article that inspired that tweet… which is odd since the statement they made is nowhere to be found in that article. Even if you take their excuse at face value, it still suggests non-believers lack peace of mind, which isn’t true. Meanwhile, they original harmful tweet is still up and they haven’t issued any sort of apology for their role in adding to the confusion.

February 8, 2018
The Mormon Church Was Complicit in Rob Porter's Alleged Abuse
Next Post