Hobbs, New Mexico is one of those cities that has a Ten Commandments monument outside the local courthouse. It’s been up there for decades. A couple of weeks ago, when an atheist activist spoke at a city council meeting about why it needed to be removed, he was essentially mocked by the elected officials. 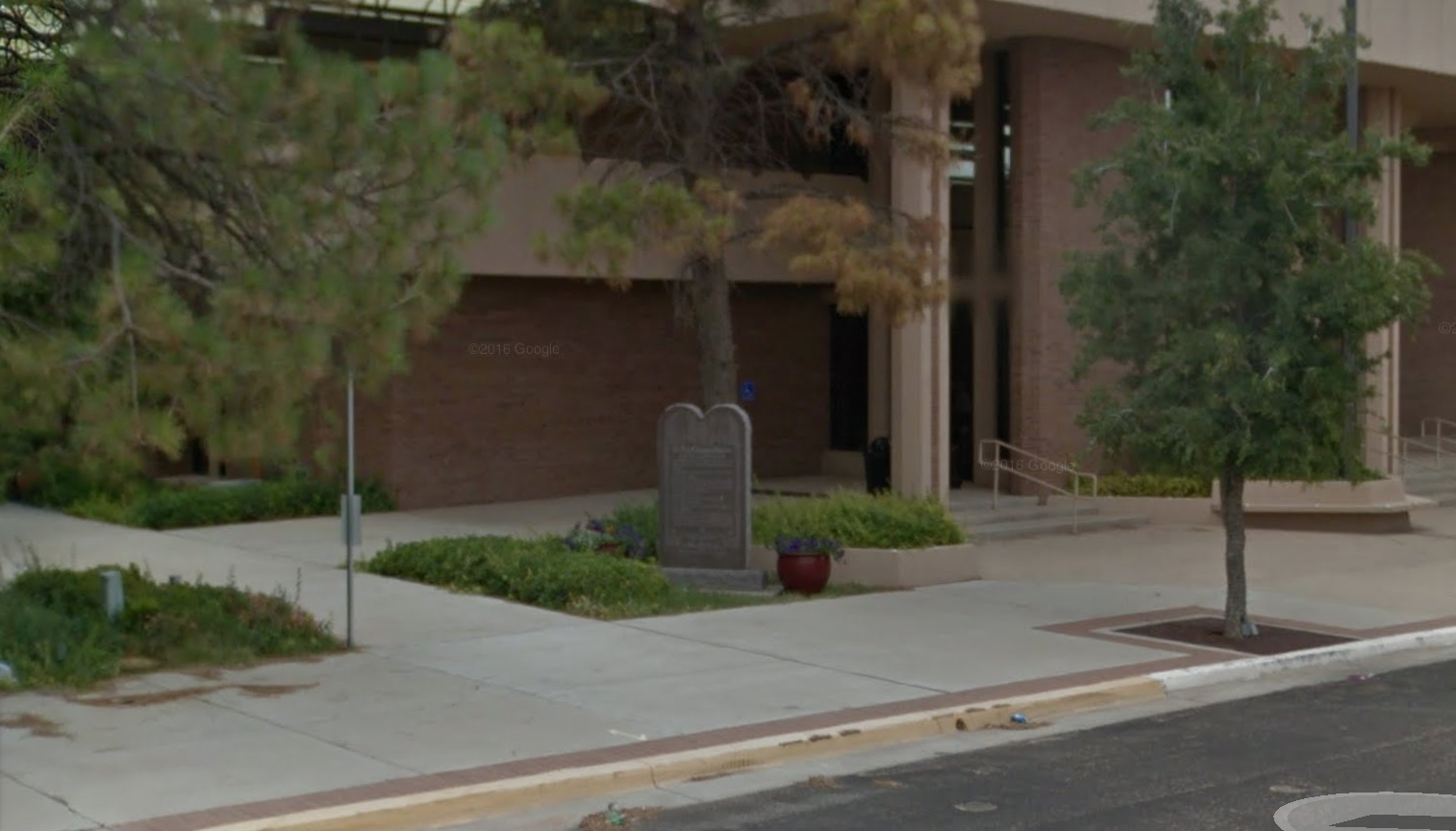 One of them slapped his knee in laughter. Another argued about his interpretation of the First Amendment’s Establishment Clause, before telling him, “Well, I think you should see if you can get the Constitution rewrote.” Another dismissed him because he had been seen at a local “Black Lives Matter” rally. And another said in a ranty monologue, “I hope we continue being — we will continue being a Christian community. I’m a Catholic and I’m a Christian.” (As if that mattered.)

I bring that up because elections for several of the seats for City Commission are taking place a month from now, and a man named Dennis Wayne Barcuch is running for the District 5 seat (currently occupied by knee-slapper Garry Buie). 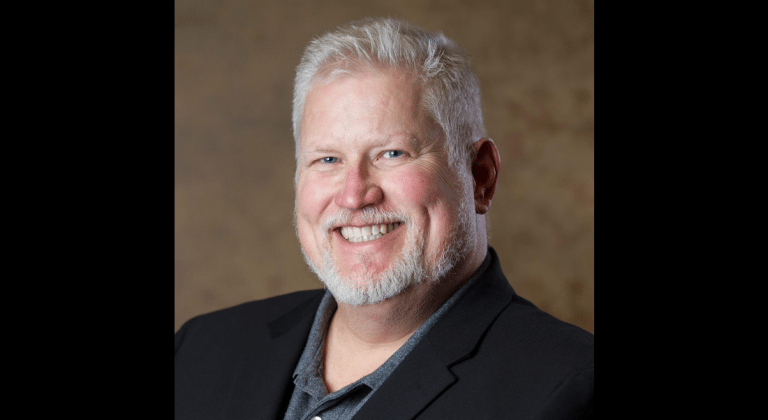 Naturally, he’s hyping his religion as a selling point for his candidacy. He even said on Facebook on Sunday that, if elected, he would make sure the Ten Commandments monument stays right where it is. 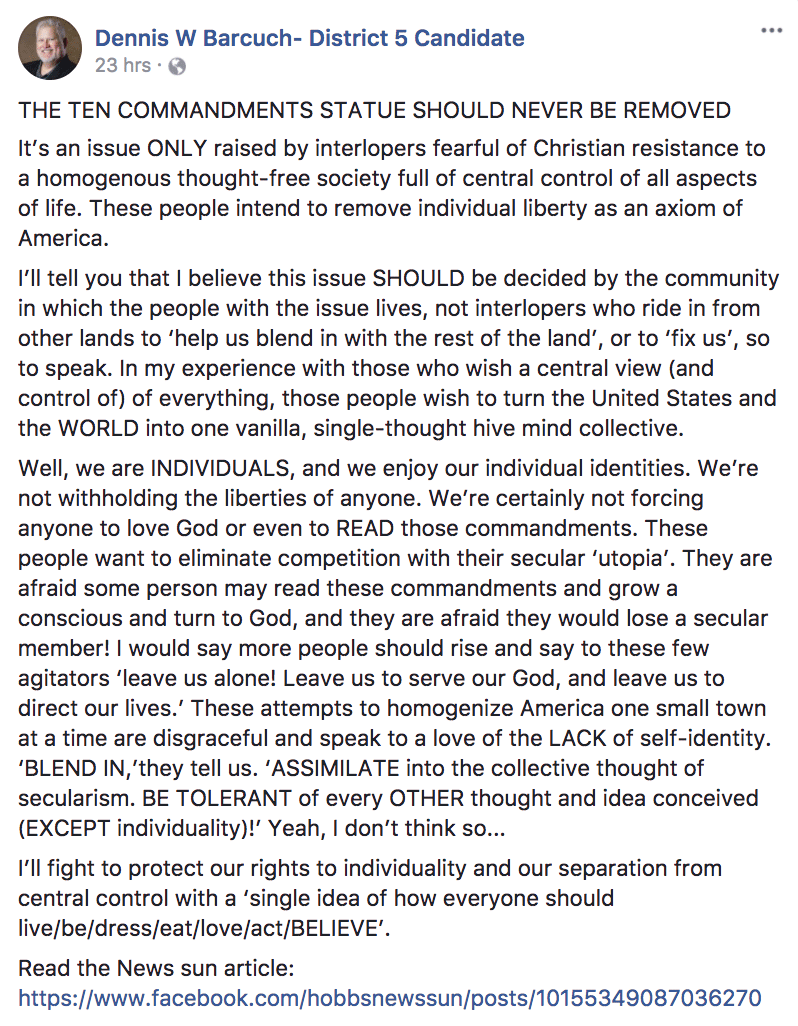 THE TEN COMMANDMENTS STATUE SHOULD NEVER BE REMOVED

It’s an issue ONLY raised by interlopers fearful of Christian resistance to a homogenous thought-free society full of central control of all aspects of life. These people intend to remove individual liberty as an axiom of America.

I’ll tell you that I believe this issue SHOULD be decided by the community in which the people with the issue lives, not interlopers who ride in from other lands to ‘help us blend in with the rest of the land’, or to ‘fix us’, so to speak. In my experience with those who wish a central view (and control of) of everything, those people wish to turn the United States and the WORLD into one vanilla, single-thought hive mind collective.

Well, we are INDIVIDUALS, and we enjoy our individual identities. We’re not withholding the liberties of anyone. We’re certainly not forcing anyone to love God or even to READ those commandments. These people want to eliminate competition with their secular ‘utopia’. They are afraid some person may read these commandments and grow a conscious and turn to God, and they are afraid they would lose a secular member! I would say more people should rise and say to these few agitators ‘leave us alone! Leave us to serve our God, and leave us to direct our lives.’ These attempts to homogenize America one small town at a time are disgraceful and speak to a love of the LACK of self-identity. ‘BLEND IN,’they tell us. ‘ASSIMILATE into the collective thought of secularism. BE TOLERANT of every OTHER thought and idea conceived (EXCEPT individuality)!’ Yeah, I don’t think so…

I’ll fight to protect our rights to individuality and our separation from central control with a ‘single idea of how everyone should live/be/dress/eat/love/act/BELIEVE’.

That last line, especially, just oozes with irony… I will free you of a centralized notion of how you should live your life! Now come with me and celebrate this arbitrary list of rules that all of us must live by.

The atheist who spoke up a couple of weeks ago wasn’t worried about losing a “secular member.” No atheist group fighting these battles is doing it out of fear that Christians will win over converts if they get to put up a stone slab telling people that working on the Sabbath warrants a death sentence. (If anything, reading the Ten Commandments, much like reading the Bible, will turn people into atheists.) The issue is one of principle only. The government shouldn’t be promoting one belief system over another — and that applies to atheism as much as Christianity.

I would say I hope he loses, but that’s not really enough since the incumbent is no better than he is. It’s unclear if a lawsuit will ever be filed, even if the law is on the side of church/state separation, but this election just shows why we need more sensible people running for local office. This is what happens when the inmates take over the asylum.

February 5, 2018
A Holocaust Denier from IL Will Likely Be the GOP Nominee for a U.S. House Race
Next Post 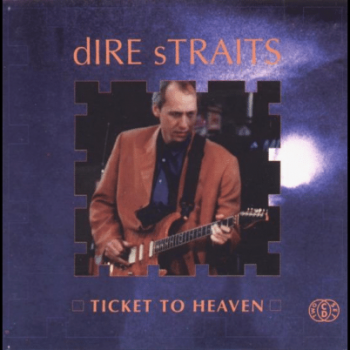 February 5, 2018 This Simple Song Appears Impossible To Decode For the Christians Who Love It
Browse Our Archives
What Are Your Thoughts?leave a comment