Remember what it’s like to have a president who defends civil rights and a woman’s reproductive freedom? I know, I know… it’s been a while. That’s why this video of Canadian Prime Minister Justin Trudeau was so jarring to me. What he’s saying is so damn sensible, but it feels out of place coming from a national leader. It’s hard to believe there are still people like that in positions of power.

Trudeau was asked a question at a recent town hall about Canada Summer Jobs, a government-sponsored program that gives subsidies to groups offering temporary work to students. Religious groups have always been eligible for these funds — and they still are — but a recent rule change means that faith-based organizations that primarily focus on banning abortion or rescinding LGBTQ rights are no longer eligible for the money. Churches that oppose abortion and marriage equality can still get taxpayer money for creating jobs at Summer Bible Camp, but if a group exists mainly to spread lies about gay people and abortion, those people are out of luck.

As you might imagine, these facts have been spun by conservatives who think Trudeau’s administration is waging a war on Christianity.

So when asked about that situation, Trudeau responded with a whole-hearted defense of everything that is good and holy.

… No religious group is going to be barred from Canada’s Summer Jobs on the basis of their beliefs, period. Anyone who tells you otherwise is pushing a political agenda.

However, there are certain groups that are specifically dedicated to fighting abortion rights for women and inclusion of LGBT communities. And that is wrong…

That is certainly not something that the federal government should be funding summer students to do, to roll back the clock on women’s rights. That’s not gonna happen. This government will continue to be unequivocal. We will stand up for women’s rights, we will defend women’s rights, and the rights of the LGBT community, regardless of what folks in certain religious groups try to push us against.

You have organizations out there, like the Centre for Bio-Ethical Reform that have been receiving thousands upon thousands of dollars of government money — of taxpayer money — to distribute hateful fliers of aborted fetuses to try and convince people to remove the right of a woman to control her reproductive choices. That is not something the federal government is going to fund…

We are not rolling back the clock on women’s rights. And I know that makes a few people upset, but there is no way government funding is going to organizations that have the specific and explicit purpose of limiting women’s rights, period.

A powerful national leader willing to take a stand against faith-based bigotry? Damn. Even President Obama never went that far. Remember: Obama was once asked if the government would give taxpayer money to groups that discriminate for religious reasons. Instead of pulling a Trudeau, Obama demurred, suggesting that discriminatory groups that provide helpful services would still get federal funding. It was disappointing then, and it’s especially disappointing now that we have a president who rolls over backwards for religious bigots. 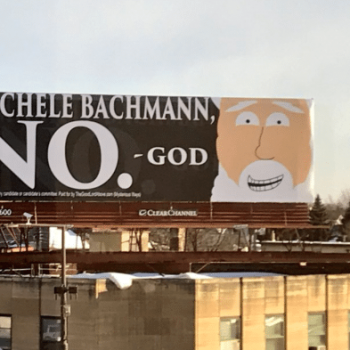