We’ve all seen our fair share of ridiculous church signs, but this one from Emmanuel Baptist Church in Indiana had me particularly gobsmacked: 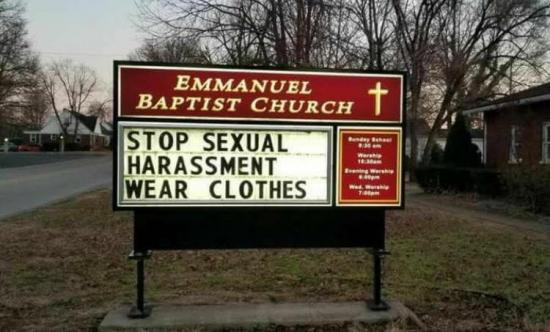 It was an appalling statement, suggesting that women were responsible for sexual assaults against them… rather than the men attacking them. It was the very definition of victim-blaming. It implies that women who cover themselves up — like Muslim women in full burqas — never get harassed or raped. And that’s just not true. The sign completely absolves harassers of any personal responsibility for their actions.

Luckily, the community was outraged:

“This brought tears to my eyes, and, I’m sorry, but being a resident in this town of mine that I love, I don’t accept this and I do not see that anyone should accept this,” Jeffersonville resident Melissa Scully said.

“I mean, would you say that to a 6-year-old girl who has been assaulted when they wear overalls and pigtails,” Jeffersonville resident Madilyn Shipman said.

The pastor of the church said he didn’t know who put that sign up, however it was never approved by him. The message was quickly changed after he found out about it. Still, the damage had been done.

I guess we’ll just have to wait for the church’s next signs: “Avoid robbery; don’t own anything.” “Avoid car accidents, walk everywhere.” “Avoid kidnapping, don’t reproduce.”

Those make just as much sense.

January 29, 2018
Pick Up Your Copy of Queer Disbelief
Next Post 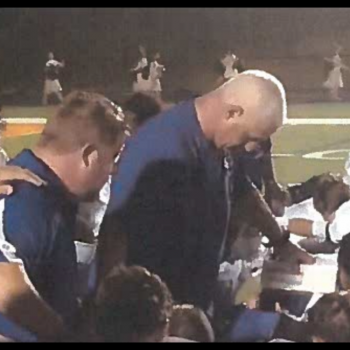 January 30, 2018 GA Lawmaker Sponsors Bill Allowing High School Coaches to Pray with Students
"Not questioning what you are told about your religion and just swallowing all of it ..."
J.P. Bunny Mormon Church President: People Who Have ..."
"Is the page responsible for what is written upon it?"
Kevin R. Cross Actor Jamie Kennedy Doesn’t Get the Criticism ..."
"I just do. I have no particular reason. I'm not angry at anyone or anything."
Tacoma Atheist MAGA Cultist Who Downplayed COVID-19 Dies ..."
"Wow. He and his sycophants really aren’t letting go of that throne."
Matri Everything Wrong With Genesis 49 in ..."
Browse Our Archives
What Are Your Thoughts?leave a comment