What do you do when you’re a high-ranking official in a church that doesn’t approve of divorce, but you’ve been cheating on your wife? For one man, murder was apparently his only option.

Stephen Allwine, a church elder at the United Church of God, has been charged with killing his wife because divorce wasn’t an option in his conservative church. I guess he either forgot that the Bible itself says “Thou shall not murder,” or he was more scared of earthly judgment from his church than punishment from God.

Prosecutors say Allwine, an “Internet technology specialist,” was using the infidelity website Ashley Madison to cheat on his wife, Amy. When his position in the church prevented him from separation, he began researching ways to kill her, including hiring a contract killer on the dark web using Bitcoin.

Allwine is accused of using an anonymous alias, “dogdaygod,” to hire an Albanian mafia group to off his wife. When that plan failed, he apparently took matters into his own hands, shooting her with a gun he bought three months earlier.

But the dark Web machinations suddenly took on new significance in November 2016 when Amy Allwine was discovered dead on the floor of her bedroom. Initially thought to be a suicide, police soon suspected foul play. Within months, they would allege Stephen Allwine was actually “dogdaygod.” He had killed his wife after Besa Mafia failed to come through.

These kinds of homicides, sadly, aren’t unusual, but what makes this case stand out is that Allwine’s motive seems to be almost entirely based on his religion. He went on trial this week for premeditated first-degree murder, and the prosecution says his faith — and position in the church — led him to kill.

The situation laid out by prosecutors was a mix of religious guilt and piety, online double lives and desperate measures…

“He was seeing other women but he didn’t want to divorce her because of his position in the church,” Washington County prosecutor Jamie Kreuser told a jury this week, the Star Tribune reported.

Of course, Allwine denied the allegations, but the evidence against him seems pretty strong. The police say Allwine was the only one shown on security camera footage when his wife was shot and killed with a gun registered in his name. They also found gunshot residue on his right hand, but not on hers.

Search warrants on Stephen’s computers showed he had been accessing the dark Web since 2014, the City Pages reported. Investigators also discovered a 35-character bitcoin wallet address on a backup drive for the suspect’s cellphone.

The same code was used by “dogdaygod” in the user’s transactions with the Besa Mafia account, prosecutors say.

This case should be a slam dunk for the prosecution, but even a guilty verdict and a long sentence won’t bring Amy back. And no resolution will likely get the church to update its strict policy on divorce. 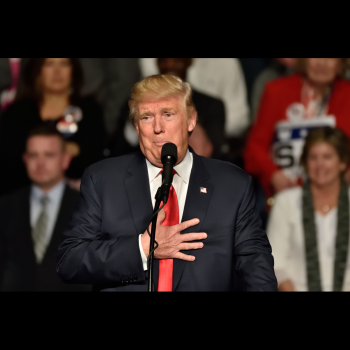 January 26, 2018 Podcast Ep. 201: Donald Trump's Evangelical Christian Sex Mulligan
"https://media1.giphy.com/me..."
Boreal “Prophet” Has Laughing Fit, Then Calls ..."
"I think it loses (or gains) something in translation."
Len Alberta Officials Put Huge Fence Around ..."
"While I respect Dr. Hawkins for his scholarship on the issue of Atheism, I am ..."
kerryberger Richard Dawkins is Still Denying the ..."
"“He was a man,” he added. “But the church — the ekklesia, the government of ..."
Akira625 “Prophet” Has Laughing Fit, Then Calls ..."
Browse Our Archives
What Are Your Thoughts?leave a comment