Whenever you ask conservative Christians about the nastier aspects of the Bible — why does He commit multiple acts of genocide? Why does He torture Job? Why does he ask a father to sacrifice his son as an act of devotion? — you’ll always get some strange justification for it. It’s part of God’s Master Plan. God didn’t want to do that, but people were sinners. It’s the Old Testament, and you should look to Jesus instead. Never do they just admit their God is a monster.

That’s what evangelicals sound like now, defending Donald Trump. In an interview with POLITICO, the Family Research Council’s Tony Perkins praises Trump for everything he’s given Christians so far — a right-wing Supreme Court justice, more obstacles for women to navigate if they want an abortion, repeated acts of bigotry against LGBTQ people — and just completely ignores everything else.

“We kind of gave him — ‘All right, you get a mulligan. You get a do-over here,’” Perkins told me…

Evangelical Christians, says Perkins, “were tired of being kicked around by Barack Obama and his leftists. And I think they are finally glad that there’s somebody on the playground that is willing to punch the bully.”

What happened to turning the other cheek?, I ask.

“You know, you only have two cheeks,” Perkins says.

But is he really the sort of person evangelicals want in the White House? Doesn’t he do damage to their reputation (or at least the reputation they want to project)?

Later, Perkins adds, “I think the president is providing the leadership we need at this time, in our country and in our culture.”

As a moral leader? I ask.

“As a leader,” Perkins replies.

These Christians have always claimed to be for family values and love, but now that they have a guy in charge who gives them what they want while abandoning those principles, they’re more than happy to let those morals rot while they bask in their power-by-association.

We had a Christian president for eight years who treated people with respect and whose family was morally upstanding, and Perkins never let a day go by, it seemed, without trashing him. When President Obama spoke about the importance of being a good father, Perkins pointed to Obama’s support of marriage equality and women’s rights and claimed there would be “blood in our streets” because of what he’d done.

Trump tears apart families by deporting people who have lived here for decades, tried to eject transgender people from the military, brags about how he assaults women, and all Perkins does is thank him for his service.

Liberals have often said the “Moral Majority” was neither. But there’s never been more solid proof that evangelicals are morally bankrupt. They don’t really give a damn about all those “principles” they promoted since they’re perfectly willing to toss them aside for a president who appoints more conservative judges from their fantasy draft list.

Remember: Perkins isn’t some fringe Christian. He’s a leader of the Religious Right who represents millions of conservative Christians, all of whom are implicated in this hypocrisy. The same people who love to whine about how they’re persecuted are celebrating a man who’s persecuting other people on their behalf. Trump couldn’t get away with his worst actions if evangelicals spoke out against him. But they’re cowards. We can’t rely on them to do the right thing.

We knew that before, but it’s glaringly obvious now.

January 23, 2018
A Satanist Fights for Her Religious Right to an Abortion in MO's Supreme Court
Next Post 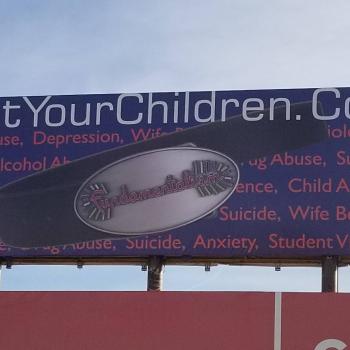 January 23, 2018 BeatYourChildren.com Billboard Sponsor Wants to End Corporal Punishment
Browse Our Archives
What Are Your Thoughts?leave a comment