Anne Graham Lotz: God May Send a Nuclear Strike to Punish Us for Immorality

Anne Graham Lotz, daughter of evangelist Billy Graham, is one of those kooks who believes God controls the weather, but she went even more extreme in an interview with Decision Magazine, saying that God would send a “nuclear strike” against us because we’re so immoral.

Lotz told Decision Magazine it seems that God is trying to rouse humanity’s attention through the exhausting run of natural disasters, violence and even the natural phenomenon of the total solar eclipse last August that made a path across the entire continental United States — a phenomenon that some Jewish rabbis considered a divine warning to a secular nation.

Lotz says she believes severe judgment is coming and has partly begun. “And I’m talking about something like a nuclear strike, an earthquake that splits us in two, an EMP (electromagnetic pulse) attack that devastates our electrical grid. Something major that would be a game-changer for America, because we are so defiant and rebellious and idolatrous and immoral, and we know better.”

Yep. Shaking in my boots here.

The fact is that natural disasters and eclipses have been going on as long as we’ve been around as a species, and they’re not going to stop anytime soon. Gay people not getting married won’t prevent earthquakes just as banning abortion won’t stop a missile attack.

So if Lotz wants to pretend God is judging us by sending lightning bolts or tornadoes, well, that’s not surprising. Saying irrational things is the family business. But no one should ever take her seriously. Let’s hope, one day, she gets the help she needs. 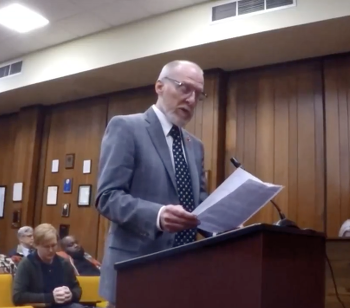 January 20, 2018 A City Commissioner in Eustis (FL) Couldn't Handle an Atheist's Invocation
Browse Our Archives
What Are Your Thoughts?leave a comment