Televangelist Thanks “You and Jesus” for Helping Him Buy a Private Jet January 18, 2018 Hemant Mehta

I still think often about a video we posted on this site more than two years ago, when two televangelists had a conversation over their need for private planes.

It happened in late 2015, right after Pastor Creflo Dollar begged his congregation (and everyone watching at home) to give him enough cash to buy a $65 million private jet.

Rather than condemning that blatant display of greed and wastefulness, Kenneth Copeland and Jesse Duplantis defended the request, saying they couldn’t do 90% of their international work without access to a private plane. Copeland even blasted “regular” air travel, saying that, as a famous person, he didn’t want to fly in “this dope-filled world and get in a long tube with a bunch of demons.”

Well, Copeland won’t have to worry about flying next to demons like us anymore, because he just purchased a “debt-free Gulfstream V” from media mogul Tyler Perry.

All thank to his gullible supporters. (And Jesus, of course.)

Are you seeing this?! I hope so! You bought it! You and Jesus!

According to his website, the deal went through over Thanksgiving. (Emphasis his.)

First, the Holy Spirit confirmed to Brother Copeland that the Gulfstream V was the plane the Lord had set aside for KCM. Right away discussions began, and Brother Copeland developed a wonderful personal relationship with the seller, Christian businessman and movie-maker Tyler Perry. Soon a contract was signed, a cash deposit was paid, and the aircraft was brought to Dallas for a very thorough pre-buy inspection process, which has wrapped up in November. And praise God, it was actually during THANKSGIVING week that the purchase was completed, the title was signed, and thanks to the CX Team, the cash was in the bank to mark it paid in full! Hallelujah, it’s done!

So that’s it. He has a private plane that cost tens of millions of dollars. At least he’s finally satiated, right? He doesn’t need any more money?

Of course he needs money. On the very page on which he announced the purchase, Copeland begged his followers to give him even more cash. (Emphasis his.)

But our work as the Elite CX Team is not done. Overall, this Gulfstream V is in outstanding condition and is an exceptional value; however, before it goes into regular service for KCM, we want to upgrade the avionics to meet new standards the FAA will require in the near future. We also need to reconfigure the interior to better serve KCM’s needs for international flights. In the next few weeks, the avionics and interior work will commence. The cost of these upgrades is approximately $2.5 million. So, as Elite CX Team members, we need to set our faith NOW on receiving that additional seed so that we can sow it within the next three to four months, as the upgrades are completed.

Sure he has a private plane, but he’s shy about $2.5 million. Can someone just help a poor man out?

If you chip in, Copeland says God will reward you.

… “The spirit of increase” is on this Elite CX Team. So know this: the Lord is working with your seed. He is providing any seed you need.

Uh-huh. And while you enjoy your seeds, Copeland will be laughing his ass off on a plane co-piloted, I can only assume, by Jesus. 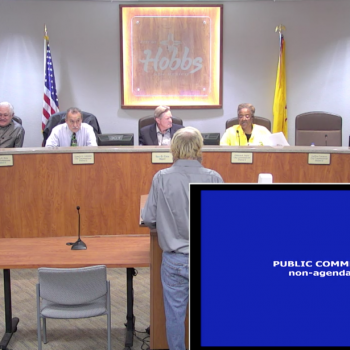 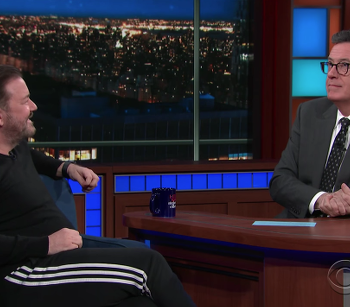 January 18, 2018 Stephen Colbert Asked Ricky Gervais If He Thinks God is Real Now That He's Older
Browse Our Archives
What Are Your Thoughts?leave a comment