Comedian Pete Holmes, whose HBO show Crashing had its second season premiere last night, has always been open about his faith. He told Christianity Today last year that he was a “Christ-leaning spiritual seeker” and those religious beliefs have often made their way into his act.

That’s why he decided to shake things up a bit in last night’s episode.

His character, who’s going through a rough patch, had a chance encounter with magician Penn Jillette, someone he knows is a vocal atheist. Their conversation, naturally, turned to religion, and Jillette, without ever seeming like a bully, pushed back on the idea that anyone could still believe in God. You can watch it here beginning around the 12:20 mark.

JILLETTE: Yeah. I have been for a long time. I guess my whole adult life.

HOLMES: I stuck with it, I guess.

JILLETTE: Oh, did you?

HOLMES: Jesus is still my co-pilot.

JILLETTE: I thought there was the wine thing! Isn’t there the wine…

HOLMES: Oh, you know, it was one miracle. The rest of the time, he was pretty dry.

JILLETTE: You really do believe?

JILLETTE: And you don’t have any gnawing doubts about that? You don’t think that maybe you’re letting things slide by you that could be more beautiful?

HOLMES: So you don’t — you don’t believe in something watching us, something keeping all of this going?

HOLMES: I just — What if you’re wrong? I mean, I could never…

JILLETTE: What if you’re wrong?

JILLETTE: No, no, that’s not true! I mean, that’s the problem with Pascal’s Wager, is there’s more than one choice. You could spend your whole life praying your ass off to Jesus, and then find out that it’s actually Zeus, and he doesn’t like you praying to Jesus.

HOLMES: … I’m enjoying the certainty I get from my faith.

JILLETTE: You don’t have certainty.

JILLETTE: No, you don’t.

HOLMES: Yeah, but this… this is all I have. I mean, I can’t… This is how I was raised, I can’t just… put it aside because you make some sense. I mean… it’s hard for me to admit that you’re making some sense.

JILLETTE: Yeah, I dig that. It’s hard to change. It’s really hard. It’s hard for someone my age to admit that… the Beatles weren’t that good! [Laughs]

That doubt guides Holmes’ decisions through the rest of the episode.

It’s rare to see that sort of dialogue in any show, much less a show written by a fairly religious person. Jillette didn’t let the Pascal’s Wager thing slide, he never slid into arrogant assholery, and he correctly pointed out that religious people don’t have any certainty even when they feel it.

The only part I might take issue with is that idea that believers take life for granted because, I guess, they’re eagerly awaiting the afterlife. Even religious people are capable of being stunned by the depths of our cosmos, or noticing the remarkable intricacies of evolution, or taking advantage of whatever life has to offer. It takes a Creationist like Ken Ham to stay blissfully ignorant of the world around him.

It’s that ability to talk about atheism without being off-putting that led Holmes to cast Jillette in that scene. He told IndieWire that Jillette was his first choice to play the atheist character precisely because he’s always appreciated the magician’s positive outlook on the world.

“Penn Jillette was my first choice, and I was concerned there might not be a second choice. You think, ‘Who can represent atheism as a really beautiful thing?’ I think atheism can easily be a beautiful thing, but it doesn’t always appear beautiful,” Holmes said. “Once Penn was in, we spoke on the phone and I loved it, specifically the way he views the world to be very hopeful and lovely.”

“Obviously, in my real life, I’ve met all different types of atheists, but when I talked to Penn in real life, I wanted 15 of the 22 minutes to just be him talking because he was so great. It was the hardest scene by far to edit this season, because he makes so many wonderful points. Points that I ultimately don’t embody. I don’t stand on his square. If it makes sense, I do agree with him, but I just look at it differently,” Holmes said. “It’s the scene on the show that got applause. Everybody on the crew, the sound guys, everybody put down their stuff and clapped when it was done. I was just like, ‘It’s a really good sign.’”

Whether Holmes sheds his faith for good remains to be seen, but that scene alone was fantastic. 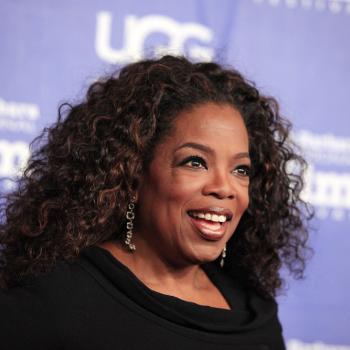