I joked on Twitter about what Donald Trump‘s Evangelical Advisory Council would say after his “shithole” comments — or, more accurately, what they probably wouldn’t say — and I haven’t been surprised yet. So far, no one has resigned over the word or the sentiments behind it. Some of the advisors expressed frustration with Trump’s callousness, but no one even pretended like they were surprised by his racism.

But I wasn’t expecting anyone to use the Bible to defend Trump’s bigotry.

Enter Mark Burns, the preacher who lied on his résumé, who said on CNN last night that Trump had a biblical basis for calling out certain nations. 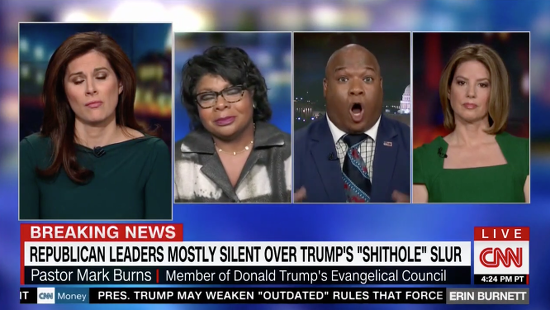 Around the 5:15 mark, Burns quotes 1 Timothy 5:8, which says people who don’t provide for their family are worse than atheists. That applies to nations, too, Burns said, and therefore Trump was right to call out those leaders who don’t care care of their own people.

… A man that does not take care of his own home, his own home, their own people, is worse than an infidel. We have somehow forgotten that in America…

And then everyone started yelling over each other.

Now, you may be thinking: What? That’s not what Trump was talking about. He just assumed every nation that’s predominantly black must be a shithole. Well, you’re right and you’re not alone.

Good thing we had CNN’s Kirsten Powers stepping in:

What you just were quoting was about the government. We’re talking about the people that are coming over. What you’re basically saying is if that you come from an s-hole country, that you’re an s-hole person. That’s not correct…

This country is filled with people who came from terrible countries, with terrible governments, and they fled here and they came here. Those are the exact kind of people I think a pastor would be saying, “We would want them to come to the country,” and they’ve been major contributors to this country!

In any case, Burns’ comment just shows you that the Bible can be used to justify anything, even a president describing entire nations as shitholes. 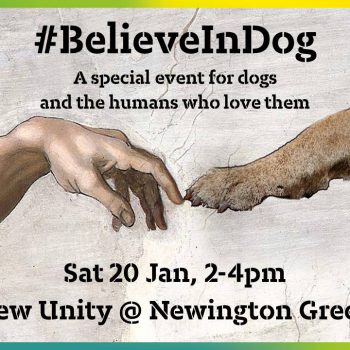 January 12, 2018
This Non-Religious Church in London Wants You to "Believe in Dog"
Next Post