Feuerstein: The Hypocrite Women at the Golden Globes Were “Dressed Like Hookers” January 10, 2018 Hemant Mehta

Feuerstein: The Hypocrite Women at the Golden Globes Were “Dressed Like Hookers”

You knew evangelical bigot Joshua Feuerstein was going to chime in after many of the actresses attending the Golden Globes over the weekend wore black to protest sexual harassment in their industry (and beyond it).

But what could he possibly complain about? Is he now in favor of harassment? No, he claims. He just thinks all the women at the ceremony — or at least “70, 80 percent of ’em” — were hypocrites because they dared to show cleavage on the red carpet.

Hollywood, your hypocrisy is showing. That’s right, ladies and gentlemen, last night at the Golden Globes, a bunch of actresses donned black and walked the red carpet in order to fight sexual harassment.

Now, normally, I’d be right there fighting alongside them because sexual harassment is bad. Here’s the only irony, is that they were — 70, 80 percent of ’em — dressed like hookers. That’s right, ladies and gentlemen, their chest, their cleavage, all over the place. Their gowns were cut all the way down to their belly buttons, and here they are saying that they don’t want to be sexually objectified.

Then why do you dress sexually provocative?

I mean, think about it. You’re out here condemning the fruit when you’re the root. I mean, how many of you guys take your clothes off for money in movies? Think about it.

Your hypocrisy is showing. Why, you say you don’t want to be sexually objectified? Your movies would make us think differently.

Well here’s the reality: If you’re going to walk around town in your McDonald’s uniform, don’t get mad when people assume you work at McDonald’s.

So, for the rest of us here in America, we hate sexual harassment, too. In fact we hate it more than you. I’ll tell you what else we hate, is you guys sexualizing our children, our society.

He went even further, turning his own statement into a meme, proving yet again that he knows how to turn the cockiness dial up to 11. 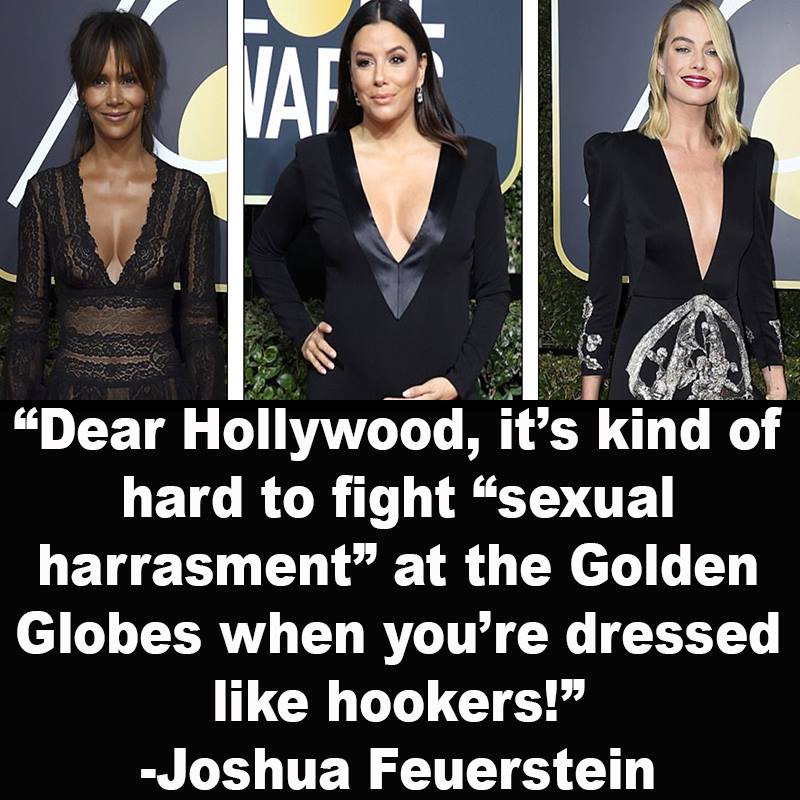 Since he has a habit of talking out of his ass, it should go without saying that Feuerstein is once again speaking with confidence about a topic he’s completely ignorant about. And that’s before we even talk about how he conflated harassment with objectification.

He ignores the fact that some men in Hollywood like Harvey Weinstein pressured women into having sex with him if they wanted to be in his movies. In one case, even when Weinstein gave actress Salma Hayek some power, he threatened to take it away unless she added a gratuitous sex scene in her film.

That’s the sort of industry-wide harassment the women were protesting at the Golden Globes.

But all Feuerstein noticed was their boobs. Because of course he did. You think he’s going to start listening to women now?

Feuerstein is the sort of person whose reaction to hearing that a woman was raped would be to ask, “What was she wearing?” And he would ask that before ever condemning the man. (It’s scary to think of what he might say to his daughters if they ever go through something that traumatic.)

He’s the sort of guy who makes a dumb video chastising women who speak out against sexual harassment without even once mentioning the men who have been outed as harassers.

He’s the sort of guy who thinks if you talk openly about sex, or make a movie that depicts it, then you have no business talking about consent and power dynamics.

He’s the sort of guy who wishes he could force women to wear burkas, but he’ll settle for calling them “sluts.”

He’s the sort of guy who mocks gay men, fights against civil rights for LGBTQ people, tells women what they’re not supposed to wear, and treats all criticism as a form of “Christian persecution.”

It’s no coincidence that this video came out the same weekend that a pastor who assaulted an underage girl years ago issued a half-hearted apology to his congregation, without going into any of the pertinent details about how he coerced her into giving him oral sex, and got a standing ovation for it. Because he was the real victim in all this.

Way to go, Christianity. You churned out some real winners with these men.

January 9, 2018
The Museum of the Bible Perpetuates Conservative Christian Ideology
Next Post