One of the more memorable moments of Roy Moore‘s Senate election loss in Alabama was when, the day before the election, his wife Kayla told an assembled crowd that any rumors that they were anti-Semitic were wrong because they had a Jewish lawyer. And then she grinned like she just aced a difficult test.

… Fake news would tell you that we don’t care for Jews. And I tell you all this because I’ve seen it all, so I just want to set the record straight while they’re here.

One of our attorneys is a Jew.

Ever since, there’s been a lot of speculation as to who that lawyer is. Liz Brody of The Forward did an investigation and said the only answer that made any sense was Richard Jaffe, the attorney for Moore’s son. That revelation became hilarious when we learned Jaffe was a friend and fundraiser for Moore’s opponent Doug Jones.

But Kayla Moore says they got the wrong guy. Her Jewish lawyer is actually Martin Wishnatsky, a staff attorney for Moore’s group Foundation for Moral Law.

“We read where we were against Jews — even calling us Nazis,” she wrote in an email to AL.com. “We have a Jewish lawyer working for us in our firm — Martin Wishnatsky. Judge hired him while Chief Justice, then I hired him at the Foundation.”

Okay. Fine. I’m not sure how everyone else missed him, but there you go. Jewish lawyer. Mystery solved, right?

“My background is 100 percent Jewish,” [Wishnatsky] said. “My grandparents immigrated from Eastern Europe, and came through Ellis Island. My parents were born in Brooklyn during World War I. There were no manifestations of faith; we were Jewish, that’s why we went to synagogue and not a church. It was just an ethnic characteristic.”

But Wishnatsky said he accepted Christ in his thirties. “I had an experience of the reality of God at 33,” Wishnatsky said. “I knew God was real but I wasn’t sure who he was.”

He became a Mormon first, then later became an evangelical Protestant Christian.

“I’m a Messianic Jew,” Wishnatsky said. “That’s the term they use for a Jewish person who has accepted Christ.”

So the Moores have a Jewish lawyer… who accepts the divinity of Jesus. I guess the criticism that they would never hire a Jew who holds Jewish beliefs is still applicable.

Wishnatsky accepted Jesus, then later graduated from Liberty University’s law school (as if you needed more evidence for how seriously he took the whole “Jesus” thing).

Oh. And he doesn’t believe the sexual assault allegations against Moore. Because why would he?

Wishnatsky told Al.com that he did not believe the multiple allegations of sexual misconduct against Roy Moore. “Why would he date (teen girls)?” he asked. “If you graduated from West Point, spent five years in the Army, served in Vietnam, graduated from law school, became a lawyer, were appointed district attorney, then your next step would be to take your clothes off with a 14-year-old? Does that make any sense? No, it doesn’t.”

There’s a lot about Roy Moore that doesn’t make sense. But a godly man abusing his power to allegedly get sexual favors from unsuspecting minors? I believe that a lot more than the idea he would hired a Jewish person to work for him.

In any case, this is something the Moores will have plenty of time to think about now that Roy doesn’t have to worry about learning the ways of the Senate.

But here’s something to think about: Perhaps Kayla Moore made her initial comment because she always believed what Roy told her about the lawyer. He grew up Jewish, after all, so the claim wasn’t implausible.

How many other things did Moore tell her that she just accepted…?

She seems very eager to dismiss any claims against her husband and write them off as acts of persecution instead of attempting to learn the truth on her own. 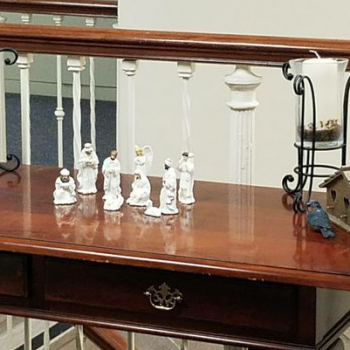 January 5, 2018 Christian Radio Host: We Must "Re-Horrify People About the Sin of Homosexuality"
Browse Our Archives
What Are Your Thoughts?leave a comment