His Wife Spanked Him with a Paddle Because Jesus Died for Their Sins January 4, 2018 Hemant Mehta

I don’t typically post older YouTube videos on this site, but this one came to my attention and it was just… weird. I’ve never heard anyone discussing it before, which is why I wanted to mention it now.

The lecture in question is an overview of the Creationist myth, given by Dr. Terry Mortenson of Answers in Genesis. For the most part, it’s a lot of stuff you’ve heard before (albeit never in a science class since none of it is science).

But then, around the 55:00 mark, Mortenson tells the audience how he explained Jesus dying for our sins to his son. It’s the most cringe-worthy thing you’ll ever hear…

… When my son, Nathan, was about three years old, one day I decided to try to teach him this. He had done something wrong, and we had a wooden spoon, one of those stirring spoons, you know? That’s what we used to spank. That was the board of education.

So I bent over and she gave me a wallop. And that hurt. [Laughs] And he just sat there, and his eyes were wide open, and I said, “That’s what Jesus did for you. He died in your place.”

Fundamentalists have the weirdest kinks…

The whole premise is flawed, though. While Mortenson says he took the spankings on behalf of whatever Nathan did wrong — and let’s assume he did something really bad — Jesus’ sacrifice is for what? People being in a same-sex relationship? Women taking control over their own bodies? Someone taking the Lord’s name in vain? Those aren’t problems. They’re only “sins” because God said they were.

In other words, God killed His son to spare us from His wrath. Maybe we’re not the problems here and God’s the one who deserves the spankings.

January 4, 2018
Newsflash, Louisiana Republicans: Students Have Always Been Allowed to Pray
Next Post 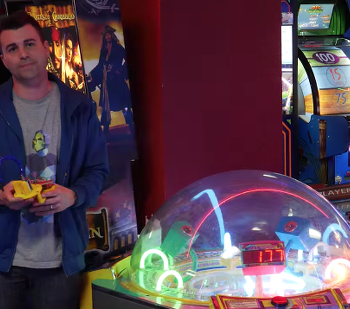 January 4, 2018 YouTuber Tries Beating an Arcade Game with Science But Discovers Something Else
Browse Our Archives
What Are Your Thoughts?leave a comment