For a Moment, Let’s Sympathize With Roy Moore’s Ignorant Spokesman

Crockett said that was the case because all elected officials had to swear an oath on the Bible, and a Muslim couldn’t “do that ethically.” Tapper correctly responded that you can swear an oath on anything. There’s no reason it had to be the Bible.

And then Crockett just sat there for waaaaay too long in open-mouthed confusion. 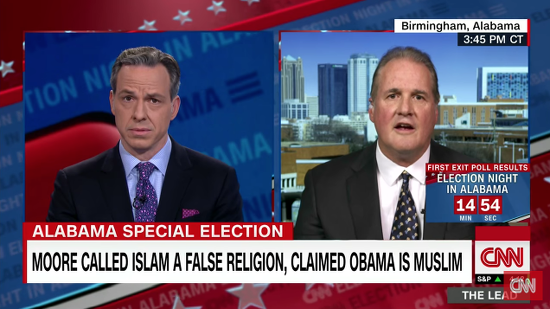 It’s easy to make fun of that exchange, but Venkatesh Rao of Ribbonfarm really wanted to dig deeper. How could someone like Crockett, who spent years in local politics, seriously and sincerely believe that swearing on a Bible was required for elected office?

How could you believe that when there are many non-Christians on Capitol Hill and many atheists in statewide offices? Were all of them swearing an oath on a book they didn’t think was holy?

Rao points out that, even if we didn’t know the law, those of us who don’t live in a conservative Christian bubble have no problem making sense of all this.

Clearly you’d have to answer the question, “How would a practicing Muslim be sworn in?” with “using a Bible” before you even get to a potential conflict.

The secular among us would guess “using a Koran.” We’d never even get to the apparent conflict. It’s a simple problem in inductive reasoning starting from the axiom of separation of church and state, and the principle of freedom of religion.

But if you are sincerely religious, your first axiom is that your book is objectively special. Not just an ordinary thing of special subjective significance to you. Its role is not empty and ceremonial. It’s not just an equal member of some largely interchangeable set of books. For Crockett, replacing the Bible with the Koran in a process changes the meaning of the process as surely as replacing gold with plastic in a piece of jewelry changes its objective market value. It’s a kind of assumed-universal functional fixedness.

Crockett very likely comes from a world where the Bible is just always in the mix. And when Tapper told him the facts — facts that didn’t compute with his understanding of the world — he froze because he experienced, as Rao says, a glitch in the matrix.

Reasoning from certainty is actually a very odd and fragile mindset that can only exist under conditions of extreme isolation, coupled with uncritical belief in the validity of a textual source over empirical experience.

All humans suck at seeking out disconfirmatory evidence, and none of us deal particularly well with it. But most of us have experienced it. It takes living in a protected Alabama bubble, an escaped reality, to make this sort of mistake…

Rao says that he has some sympathy for Crockett because he seemed so genuinely shocked by what Tapper said. It’s not like he’s Kellyanne Conway who knows the truth but says the lie no matter what. He’s someone who really believed he knew the facts… until he was confronted by someone who told him otherwise.

Jake Tapper fucked with his worldview, and now the Truman Show has to come to an end.

Ah well. With Moore’s loss, Crockett will have plenty of time to read some elementary school civics books. It’d be good for him to open up something different than his usual fare.

December 15, 2017
Wife of Disgraced GOP Lawmaker to Run to Replace Him After Suicide
Next Post

December 15, 2017 Kevin Swanson: Roy Moore Lost Because of Alabama's "Significant Sexual Problems"
Browse Our Archives
What Are Your Thoughts?leave a comment